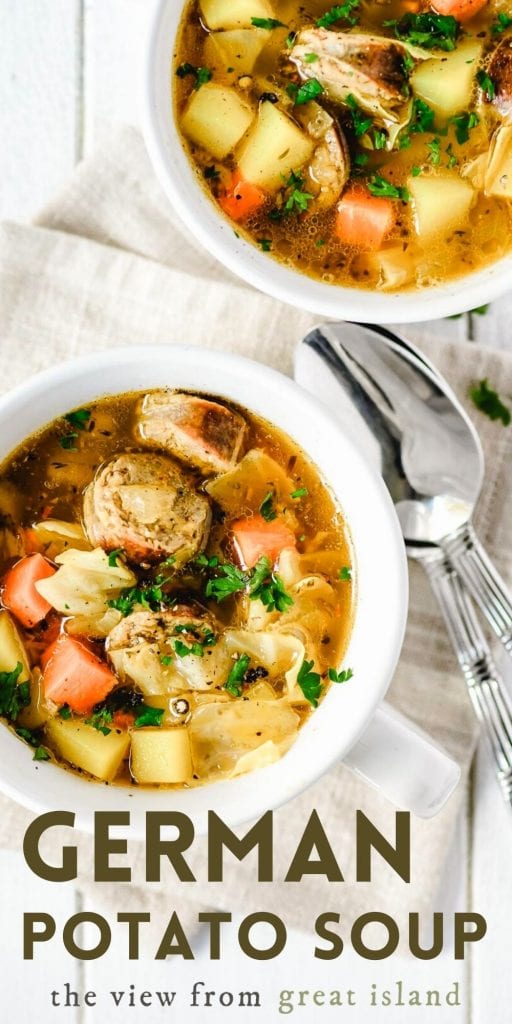 German Potato Soup with Bratwurst is an easy comforting recipe to add to your soup rotation this fall. It takes just 30 minutes to cook, and celebrates German cuisine, even if you can’t get to Oktoberfest. 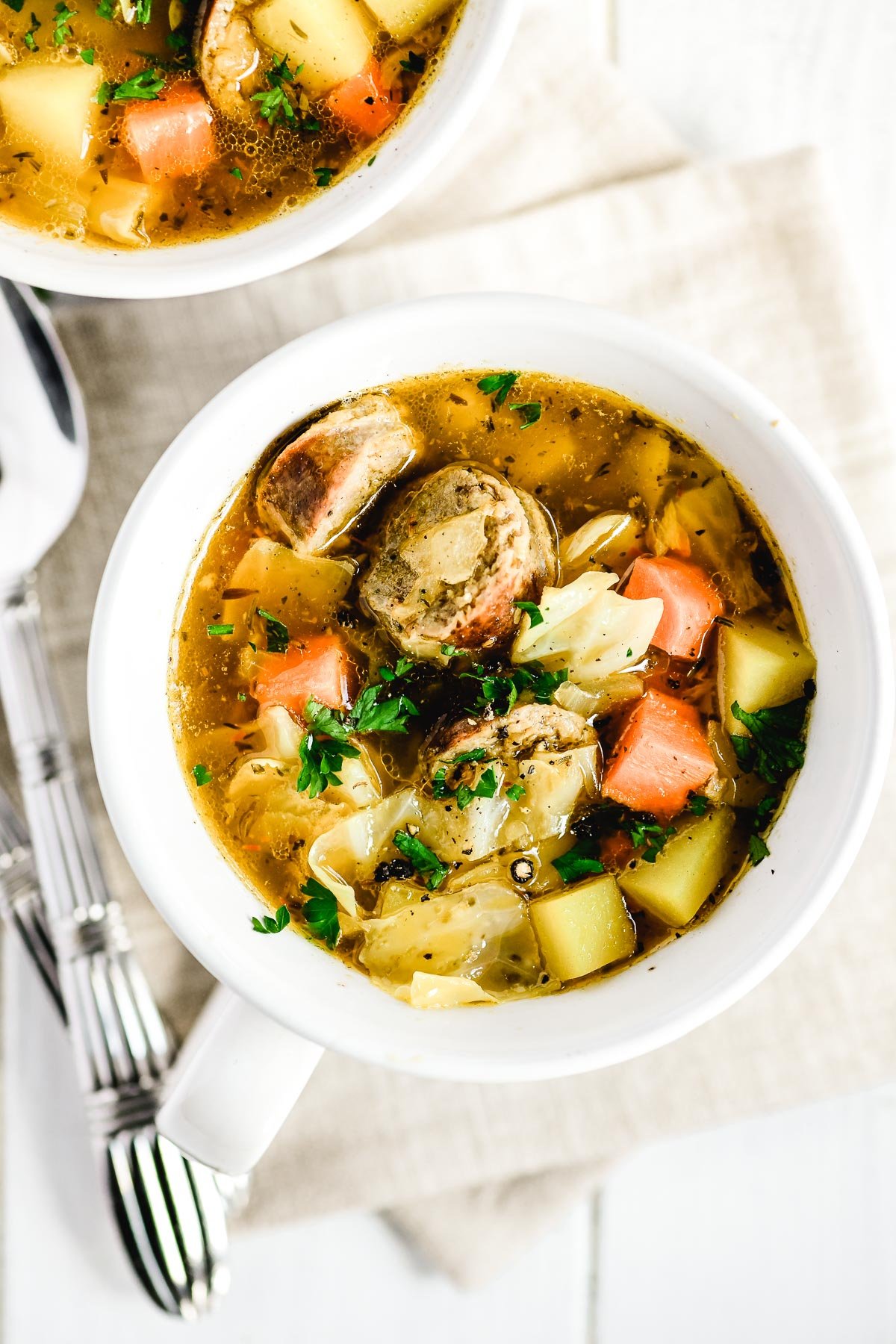 The annual Oktoberfest may have been canceled this year, but that doesn’t mean we can’t celebrate our own mini-fests, at home. This German soup is comforting, hearty (hello potatoes and brats) and perfect for the month of October. It offers up a new flavor profile and makes a nice change from the same old chicken or vegetable soup.

German food has a reputation for being heavy and fatty, but this soup is pretty light, with lots of veggies and not at all stodgy.

I’ll serve our soup with a rustic loaf of rye bread, or bake up some quick buckwheat biscuits or dinner rolls. 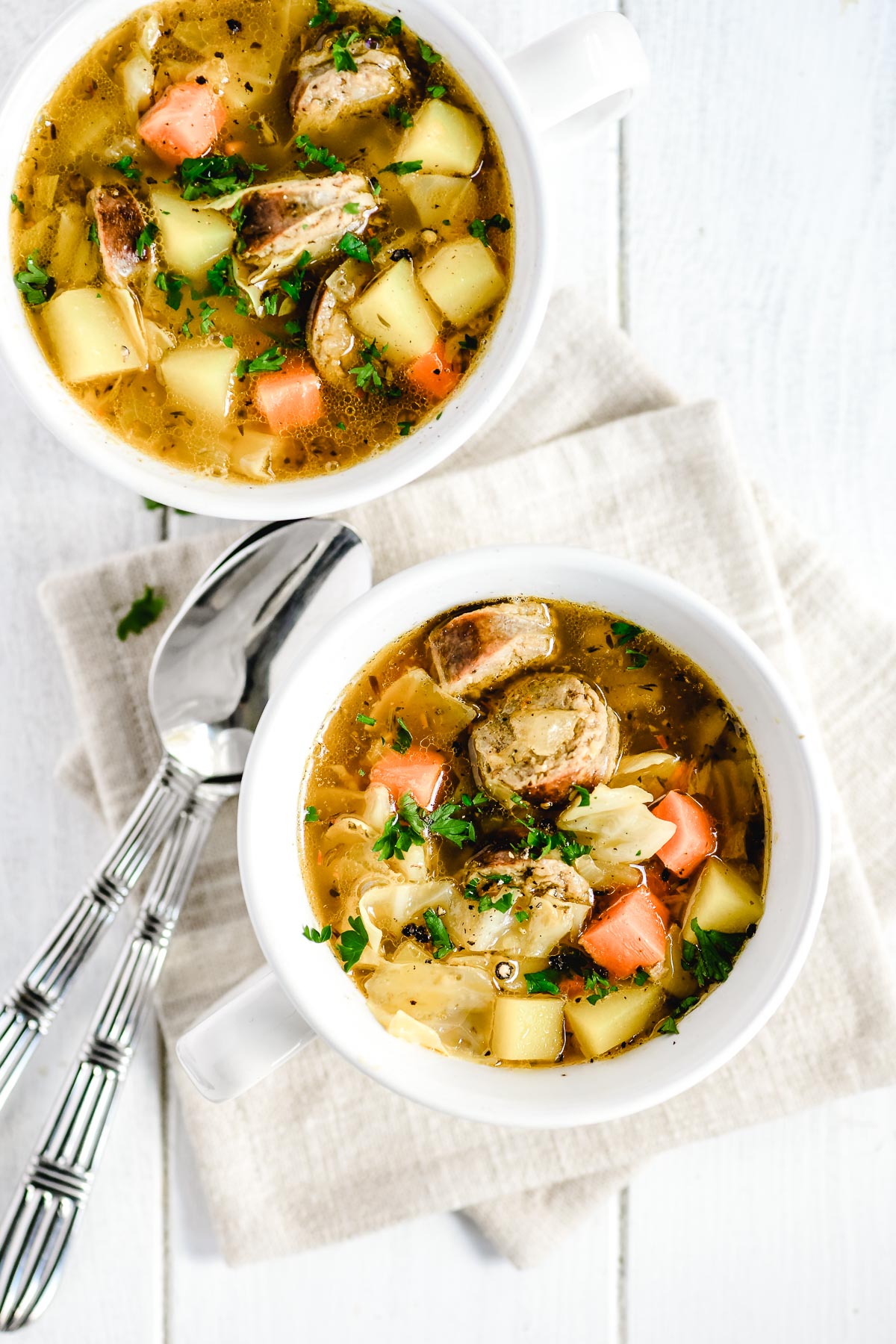 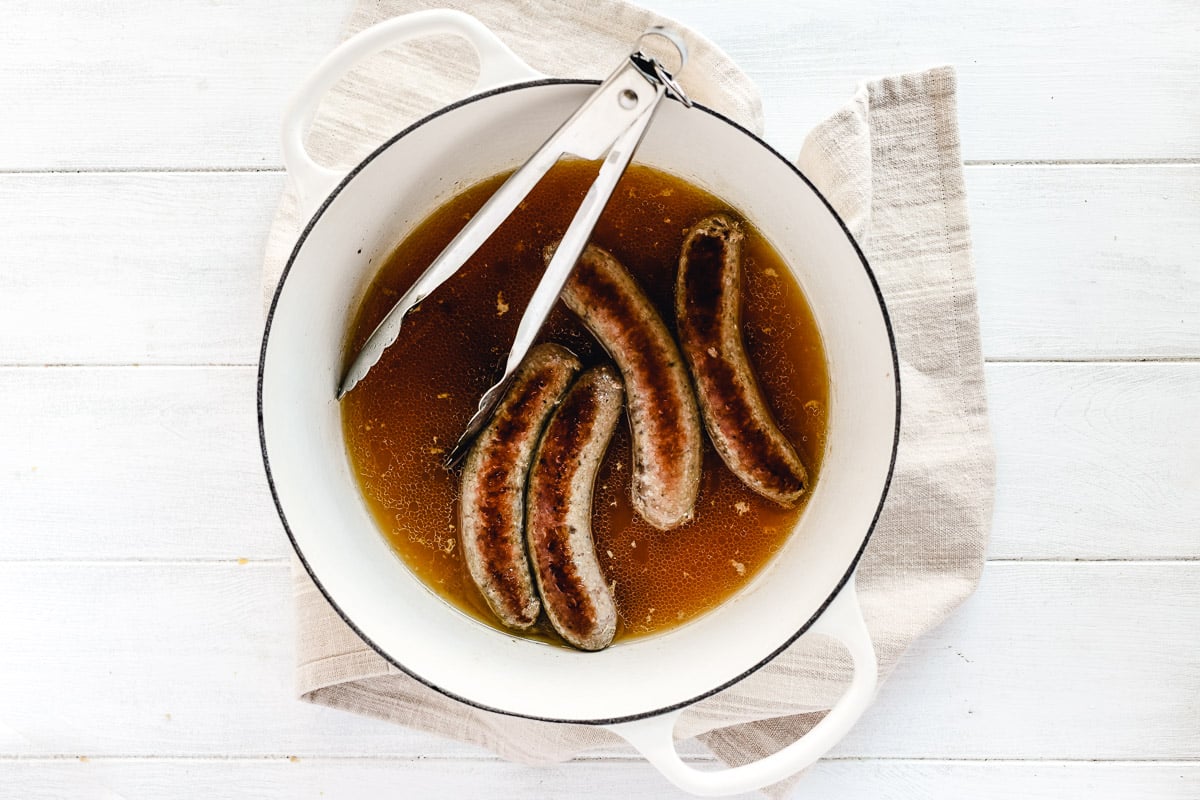 Browning the brats and then finishing their cooking in the broth gives this soup great flavor. The sausage makes this soup main course worthy. And this way, instead of a carb loaded bun, you can enjoy your brats in a bowl! (If you love brats, be sure to try my Sheet Pan Brats.)

What’s the difference between bratwurst and sausage? 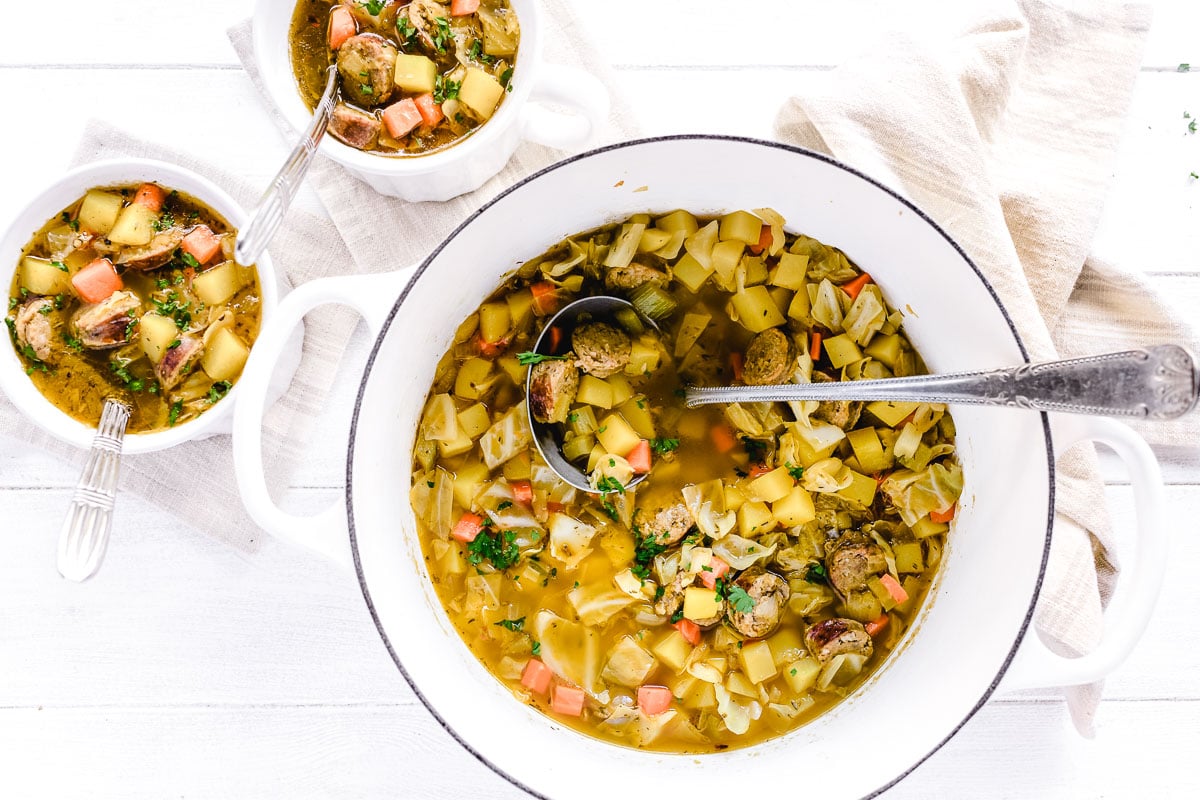 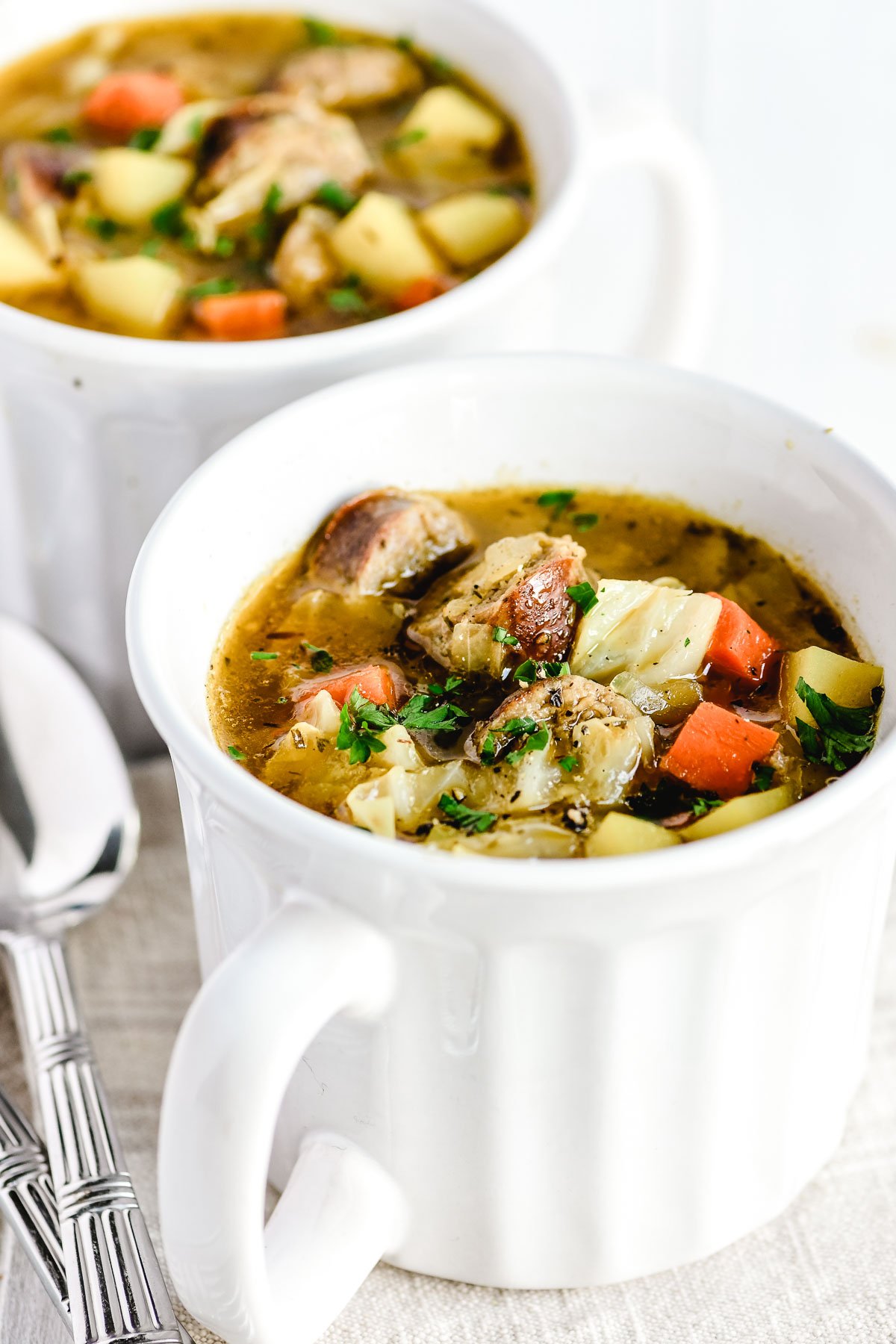 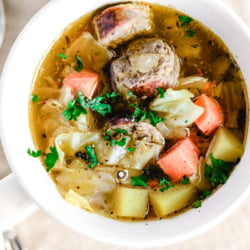 5 from 15 votes
German Potato Soup with Bratwurst is an easy comforting recipe to add to your soup rotation this fall. It takes just 30 minutes to cook, and celebrates German cuisine, even if you can't get to Octoberfest.
Print Recipe Pin Recipe Rate Recipe
Prep Time:15 minutes
Cook Time:30 minutes
Servings: 4 -6 servings

Variations: *recipe adapted from Ren Behan
Course: dinner
Cuisine: German
Author: Sue Moran
Keyword: bratwurst, dinner, potatoes, soup
Nutritional information is provided as a courtesy and is an estimate only. This information comes from online calculators.  Although The View from Great Island attempts to provide accurate nutritional information, these figures are only estimates.
Did You Make This?We love seeing what you've made! Tag us on social media at @theviewfromgreatisland for a chance to be featured. 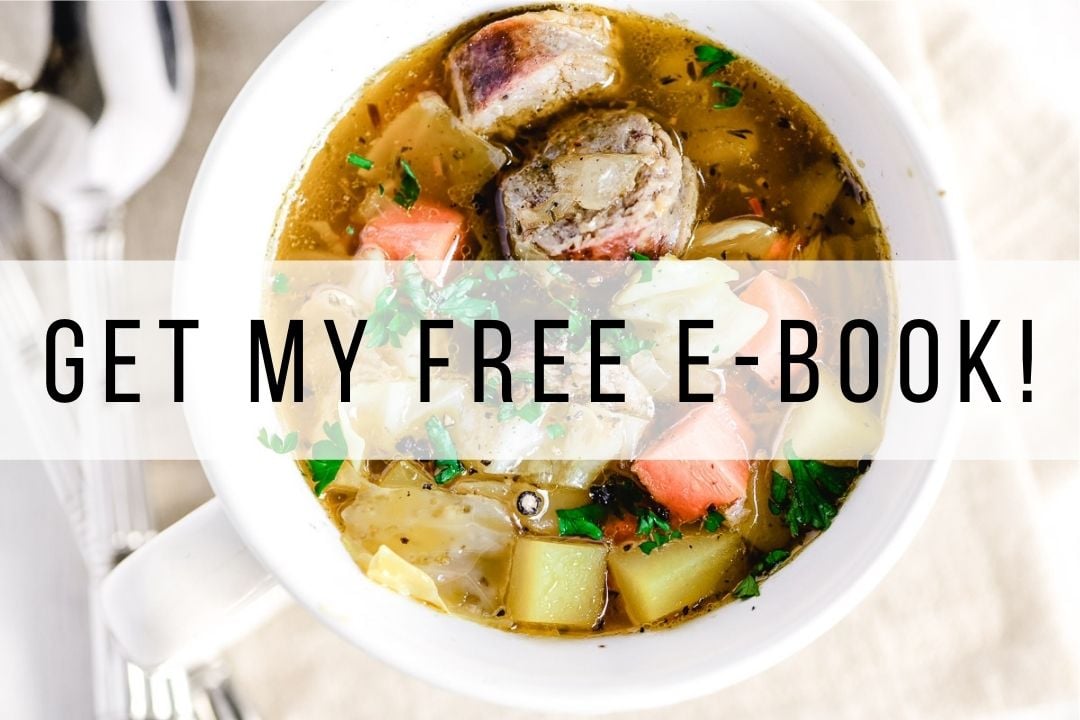 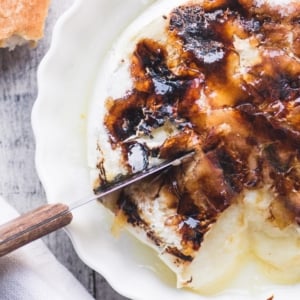 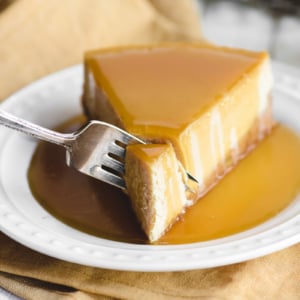 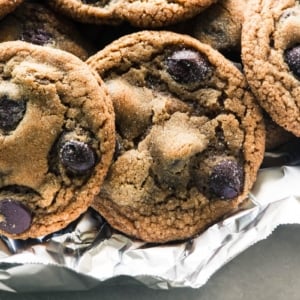 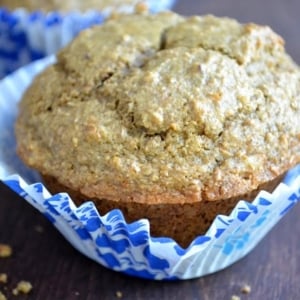