Sweet Onion Latkes with Chive Sour Cream ~ be forewarned ~ the aroma of these crispy onion fritters sizzling on the stove will draw crowds ~ don’t save them just for Passover and Hanukkah! 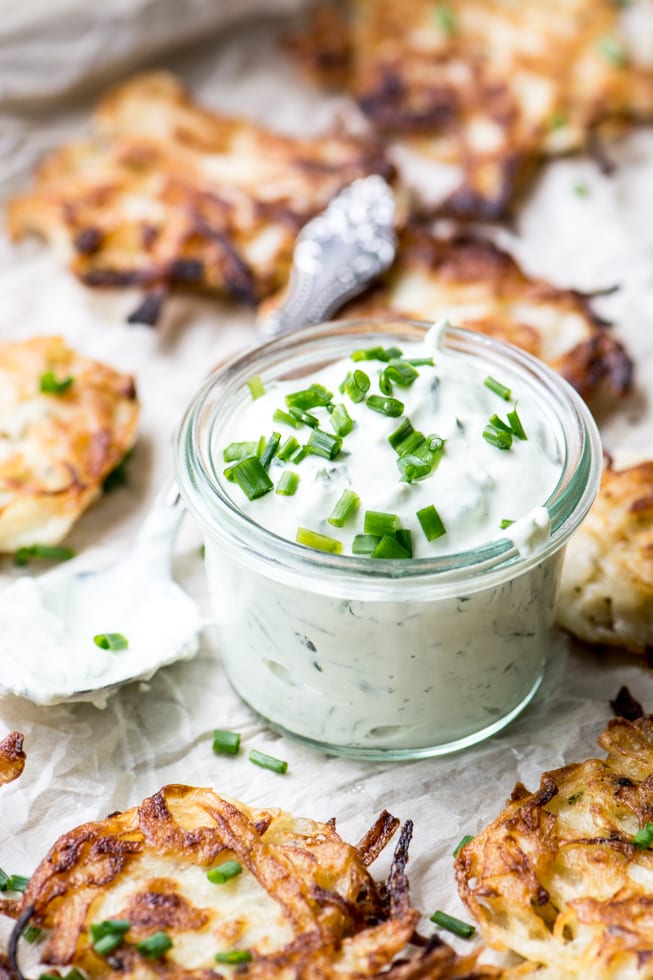 The classic latke, or potato pancake, goes back centuries in Jewish and European food history, but pretty much every culture around the world has some sort of fried vegetable pancake. It’s obvious why…these things are hard to stop eating once you start. The latkes that most people are familiar with are like little shredded potato hash brown patties. I decided to change things up and use sweet onions instead. Onions have a similar texture to potatoes, and more of a flavor bite. But don’t be afraid…sweet onions are so much kinder and gentler than regular onions! 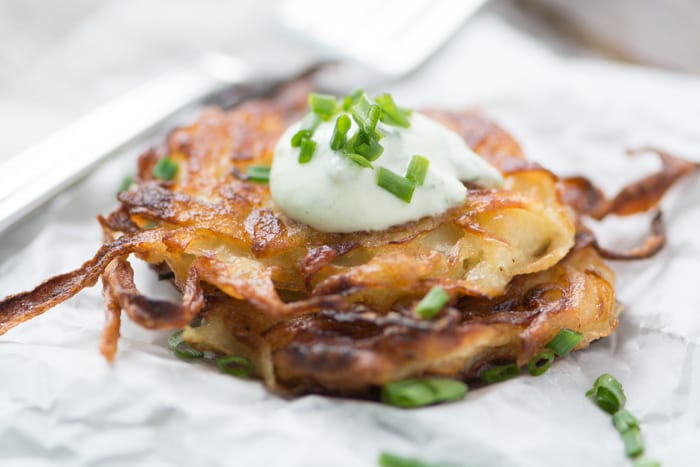 TIP: Sweet onions are sold year round right along with the yellow, white, and red onions in your supermarket. They have a characteristic squat shape and papery skin and they’re milder than other onions. When they’re in season, you can use specialty sweet onions like Vidalia or Maui. 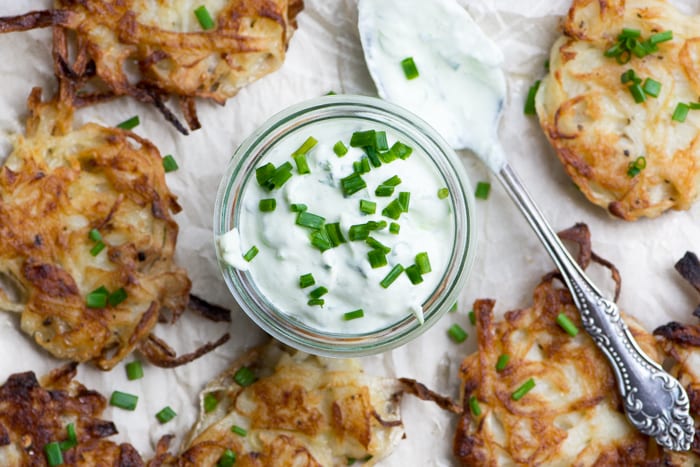 Latkes are a homey food that should really be served piping hot right out of the skillet ~ the oil should still be sizzling on their surface as you dig in for you first bite. That’s to say, you don’t want to fiddle with them too much, just make a great sauce to go alongside and sprinkle them with some fresh snipped chives. These Sweet Onion Latkes are great with eggs and a cup of coffee in the morning, or they can go with your evening meal as a simple side dish. 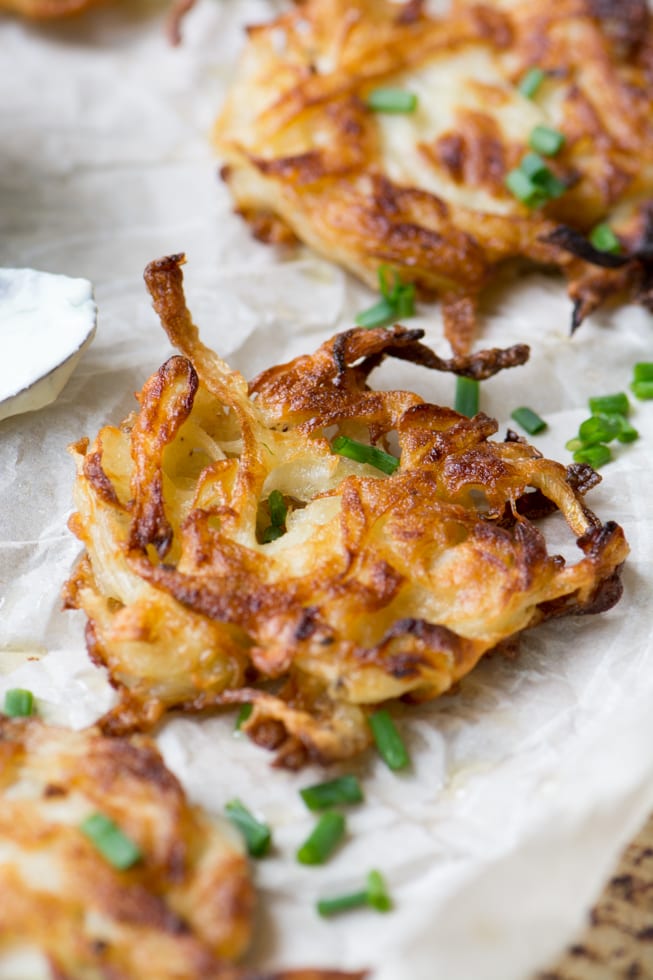 When you drop the batter into the hot pan, flatten the latkes out a bit with the back of the spoon, and don’t worry about the shaggy edges…they’ll crisp up and become the best parts!

TIP: I don’t recommend shredding the onions in a food processor or with a box grater, which can turn the onions to mush…I like to slice them as thinly as possible with a mandoline slicer, and then cut those rounds into quarters. 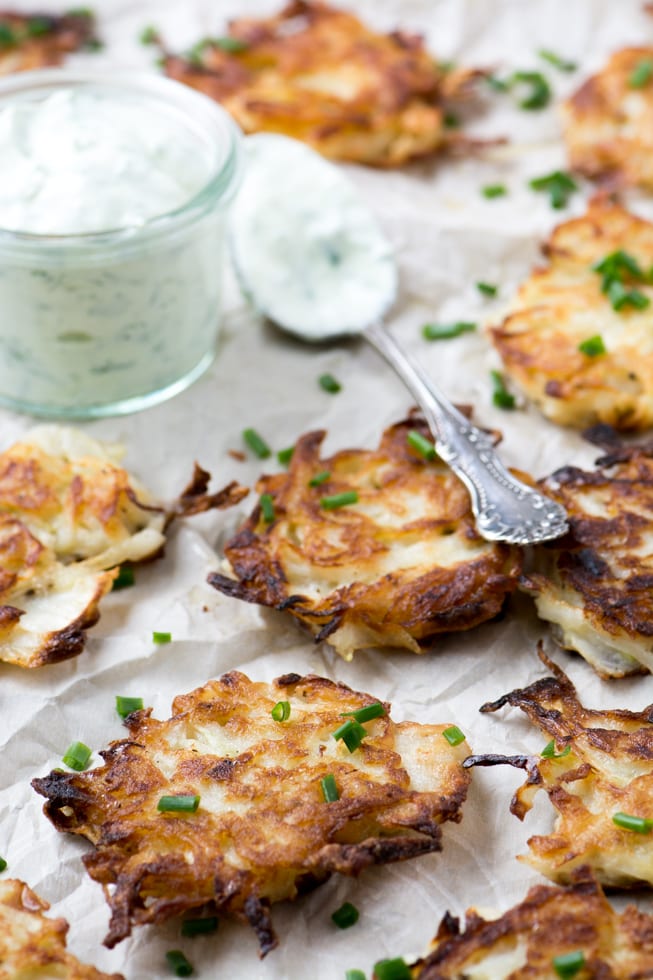 Of course a great latkes is only as good as its sauce, and while it’s traditionally applesauce, I love to experiment with new combinations. Here I’ve blended sour cream with fresh chives and horseradish to make a cool and creamy twist on tradition. 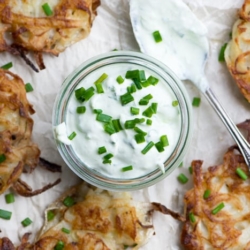 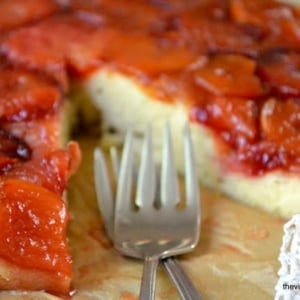 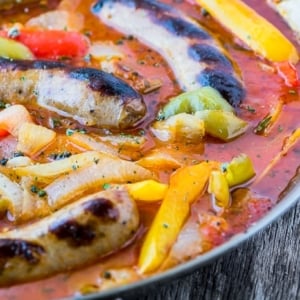 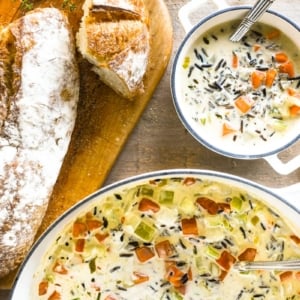 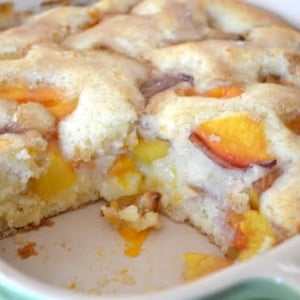