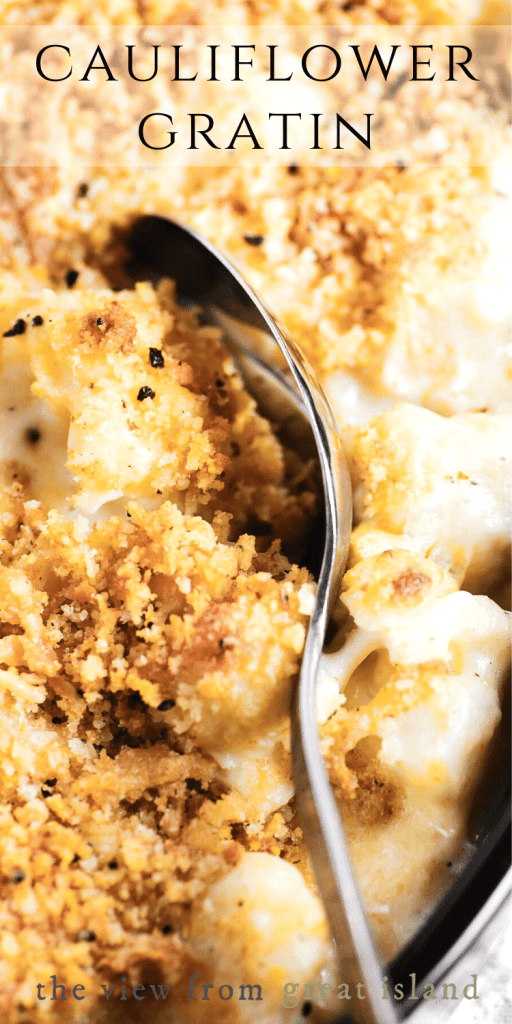 I’ve made some subtle improvements to Ina Garten’s Cauliflower Gratin to make this top rated side dish even easier, and more delicious. Try it this holiday season with (or without) my tweaks, you’ll love it!

Ok, claiming to update one of the Contessa’s recipes is pretty arrogant, I cop to that, because among all the celebrity chefs Ina’s recipes are consistently the most reliable. She’s known for being a meticulous recipe tester and it shows. But good food is an art, and artists can approach the same subject from slightly different angles with equally great results. And when you start with something amazing and make it a little bit better, everybody wins.

Whether you’re on team Ina or team Great Island, you’re going to love this classic side dish. It’s amazing either way 🙂

Cauliflower gratin starts with a nice fresh head of cauliflower.

Fresh cauliflower is delicate, which is why you see it wrapped in plastic at the supermarket. Look for one that’s pure white and unblemished. If you see browning through the plastic (it’s not harmful, just a little oxidation) pass it up. Rummage until you find one that’s firm and snowy white. Look for fresh green leaves still attached.

For this recipe look for a head that is about 3 pounds. Once it’s trimmed and cored you’ll have the right amount. A little bigger is fine, but a smaller head might not fill your gratin dish.

Otherwise it won’t get cooked though and your gratin won’t have that soft melting texture that makes it famous. Ina boils hers in a big pot of water, pasta style.

UPDATE: No need for the big steamy pot of boiling water…pop the florets into a large microwave safe bowl, cover with plastic or a microwave cover, and cook for 4 minutes. Don’t add any water, there’s enough moisture in the cauliflower to steam it perfectly. This saves tons of time, avoids a watery gratin, and mushy cauliflower. Bonus, the cauliflower retains more of its nutrients with this cooking method.

The creamy base of a gratin is a white sauce, or béchamel, in France.

UPDATE: Ina uses milk for her sauce, but I’ve tweaked that to 1 1/2 cups milk plus 1/2 cup cream. Again, this is a special occasion dish, and that bit of cream makes it special. Also, adding cream helps insure that the sauce stays smooth and creamy, without curdling, as it bakes.

Ina boils her sauce for a minute before adding the cheese, but I don’t. As soon as I see the first bubbles I take it off the heat. There’s no need to boil because the sauce has already thickened by that point.

Good sharp cheese is essential to creamy casseroles and gratins.

Creamy sauces seem to absorb flavor as they cook (this isn’t scientific, but definitely observed) and so I find you have to pay special attention to using strongly flavored cheeses and plenty of salt. Ina uses Gruyère which is a good sharp French cheese. It’s pricey but this is a special occasion dish so I think worth it. You could also use sharp cheddar but I sometimes find it doesn’t melt as smoothly.

UPDATE: Ina uses 1/2 cup of grated Gruyere in the sauce, I’ve upped it to one full cup so the flavor is noticeable and the sauce is extra cheesy. Don’t be tempted to increase the amount of Parm, though, that might be too sharp.

Ina uses a layering technique in her gratin; she lays down a layer of sauce, then tops it with the cauliflower, and then spoons the remaining sauce over top.

UPDATE: I find it much easier, and better, to stir the cauliflower right into the saucepan with the cheese sauce and then turn everything into the gratin dish. It’s all mixed perfectly, and there are no naked florets hanging out without a coating of sauce.

The crumb topping on a gratin is everybody’s favorite part

Diners will clash over who gets more of it on their plate. Don’t be surprised if an unscrupulous family member tries to siphon off more than their share 🙂

UPDATE: More is better when it comes to a crumb topping, especially when you mix it with cheese and melted butter. Ina uses 1/4 cup crumbs, but I’ve doubled that.

Ina calls for fresh breadcrumbs, but I think dried are better and crunchier for a gratin. I also make my own crumbs with herb crackers; it’s an instant flavor boost over plain crumbs.

Gratins and cheesy casseroles are fairly easy to assemble, but I find that sometimes things can go wrong in the oven at the last minute. Ovens often run hot, and excess heat can ruin a gratin.

UPDATE: Ina bakes her gratin in a 375F oven. I’m sure this works great for her, but I’ve noticed over the years that higher heat can curdle a gratin (or mac and cheese) and ruin the texture. I prefer to play it safe at 350F and increase the temp at the end if I feel I need extra browning. This allows enough time for the sauce to get bubbly throughout, and the top to turn golden. Don’t be tempted to put this under the broiler, that’s a sure way to get the sauce to split and the crumbs to burn.

Speaking of temperature, Ina states that the dish can be served hot or at room temperature…I beg to differ, the dish needs to be hot.

Classic casseroles for fall and winter 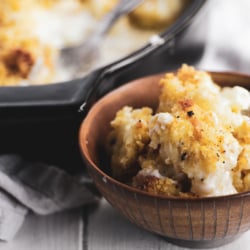 How to make cracker crumbs

Roughly break apart crackers and put them in a food processor (a small or large one will work) Pulse repeatedly and then let the machine run until the crackers are finely ground. Any extra crumbs can be kept in a zip lock baggie in the pantry. 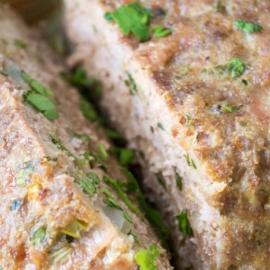 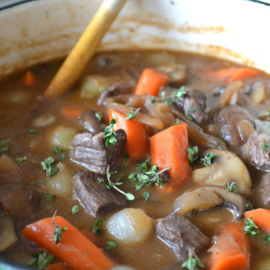 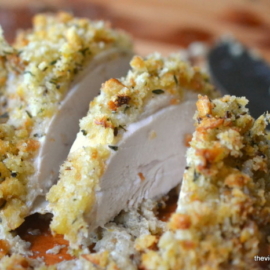