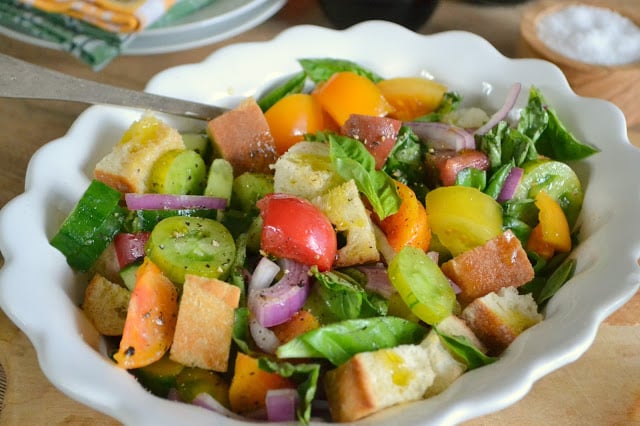 Panzanella Salad is a classic Tuscan tomato and bread salad that is the perfect way to showcase ripe colorful produce and a fabulous oil and vinegar ~ it couldn’t be simpler or more delicious! 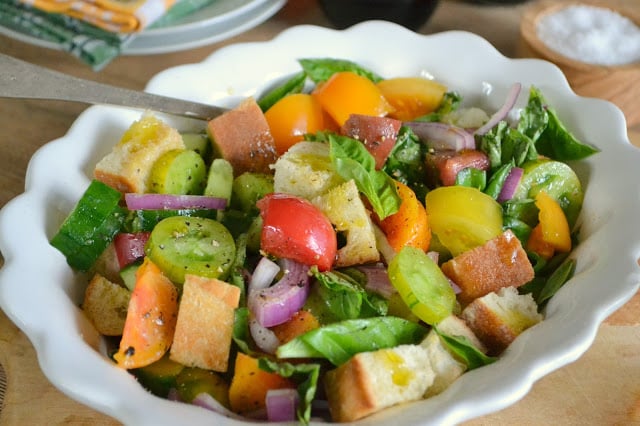 It was my birthday last week and my husband and I planned to have diner at an Italian restaurant in our neighborhood. At the last minute, we decided to switch it out for several nights of taken-in instead. More food: same amount of money. We felt pretty clever. 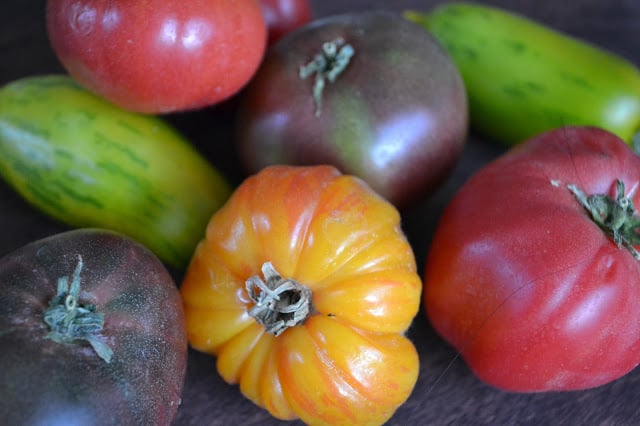 The first night was Chinese. The second was Middle Eastern, and the third night we got appetizers from the same Italian restaurant we were going to eat at in the first place. 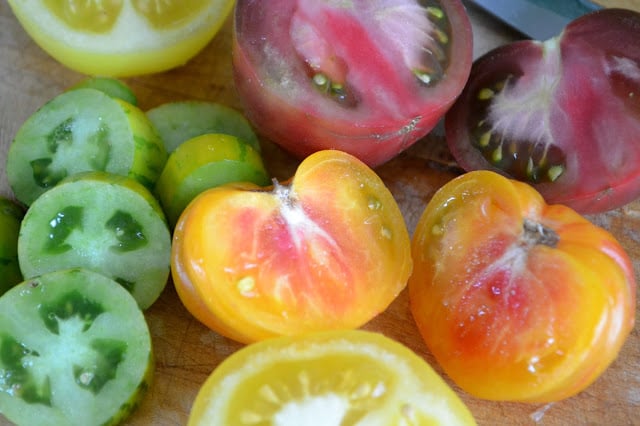 One of the things we ordered was panzanella. I’ve always avoided it because the thought of bread in a salad just didn’t click with me. But, like so many other things in life, all it took was giving it a try to prove me wrong. 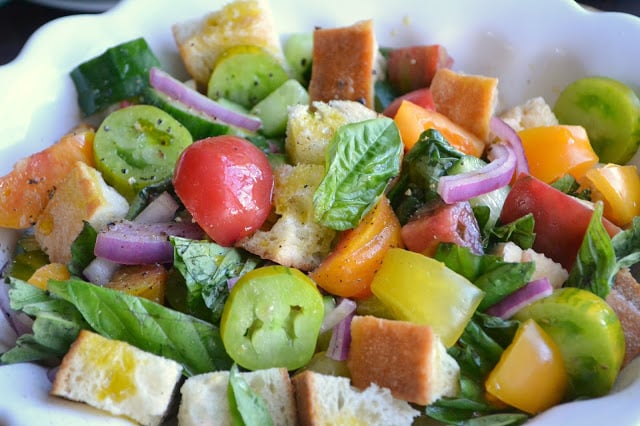 It’s a much more exciting salad than I expected, but very simple at the same time. There are the colors of the juicy chunks of tomato, crusty cubes of bread, half moons of crunchy cucumber, and slivers of sharp red onion. No greens except the roughly torn basil leaves which contribute a strong licorice taste. Add the fruitiness of the olive oil, the tang of the vinegar, and the hot bite of coarse black pepper and you wind up with a wonderful thing. But at its core, the real thing about this salad is the mixing of the tomato juices and olive oil with the bread. Both the flavor and the texture are memorable. 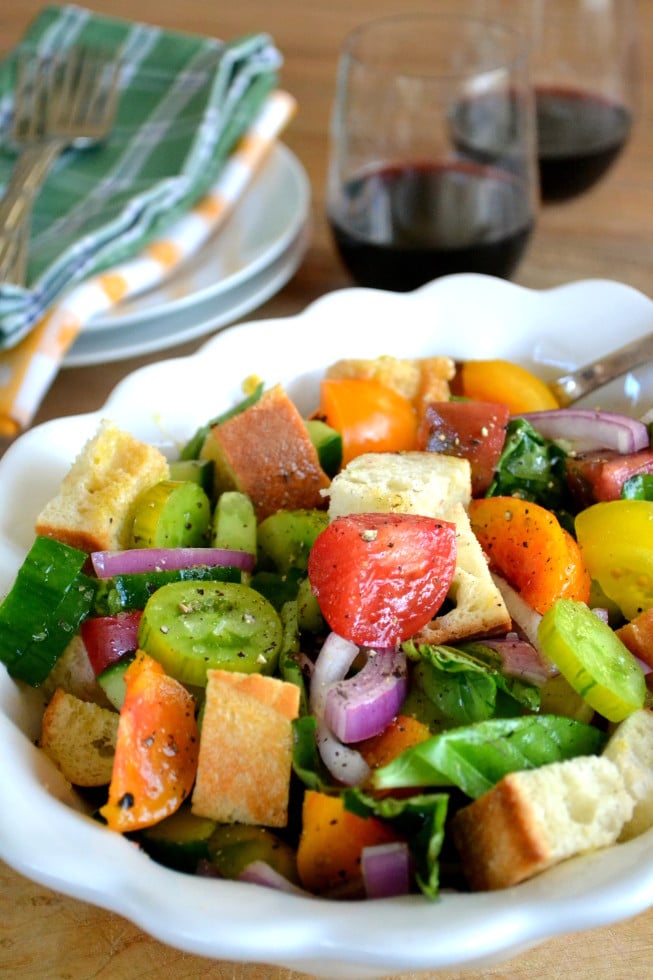 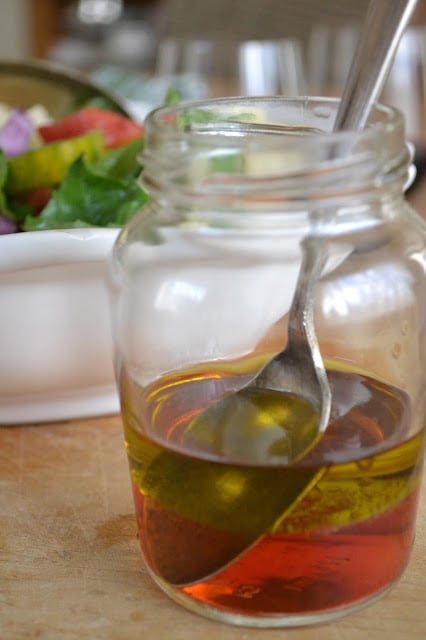 I know this kind of salad is the ultimate late summer experience, but actually there are some pretty good tomatoes available year round these days, and the bread gives it a heartier feel that seems appropriate for cooler weather. There are a few keys to it, as far as I can tell. First, obviously, get good tomatoes. And the crustier the bread, the better. When it soaks in the dressing, the soft part of the bread will become almost custard like, but the crust will retain its firmness. Then, get a really fruity green olive oil. Something that tastes amazing all by itself. I’ve been making a point to pick up a different brand every time I replenish my supply. I’m finding that the local California oils are my favorite, they have the freshest, fruitiest flavor. 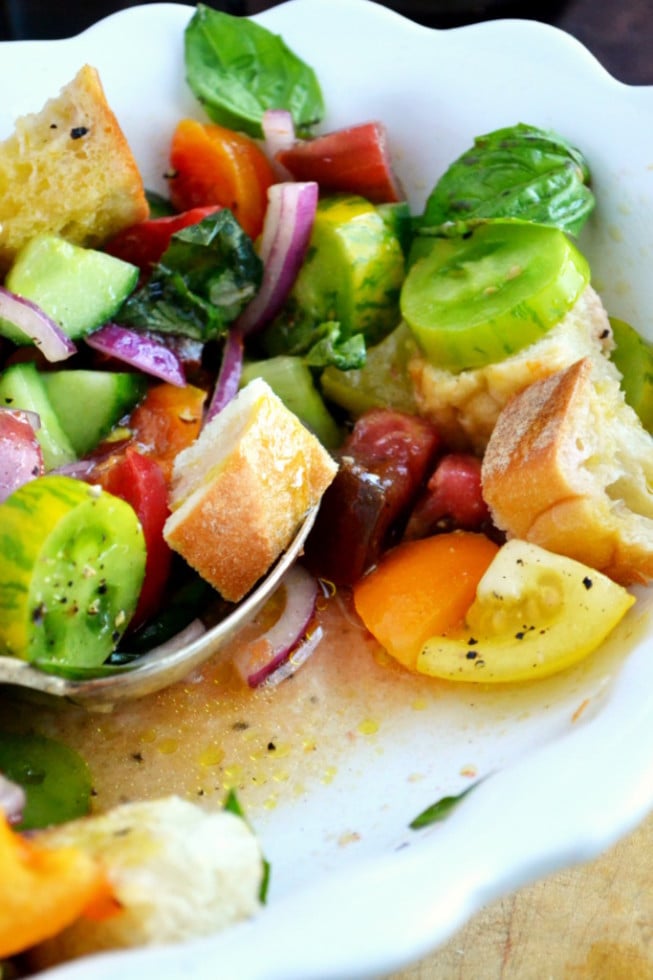 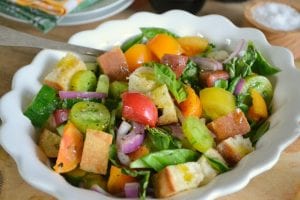 Save Recipe Saved! Print
No ratings yet 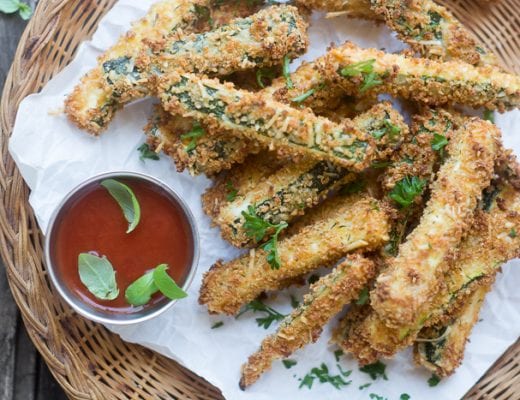 Fresh Zucchini Recipes to Make a Dent in Your Bumper Crop 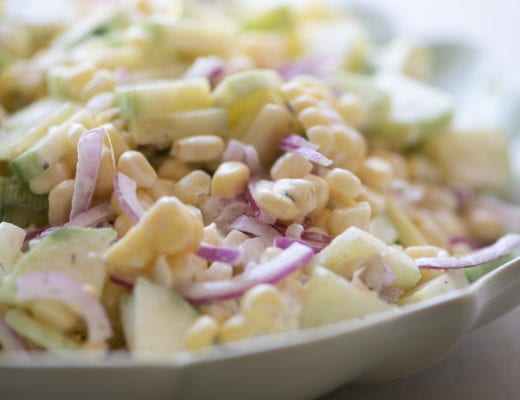