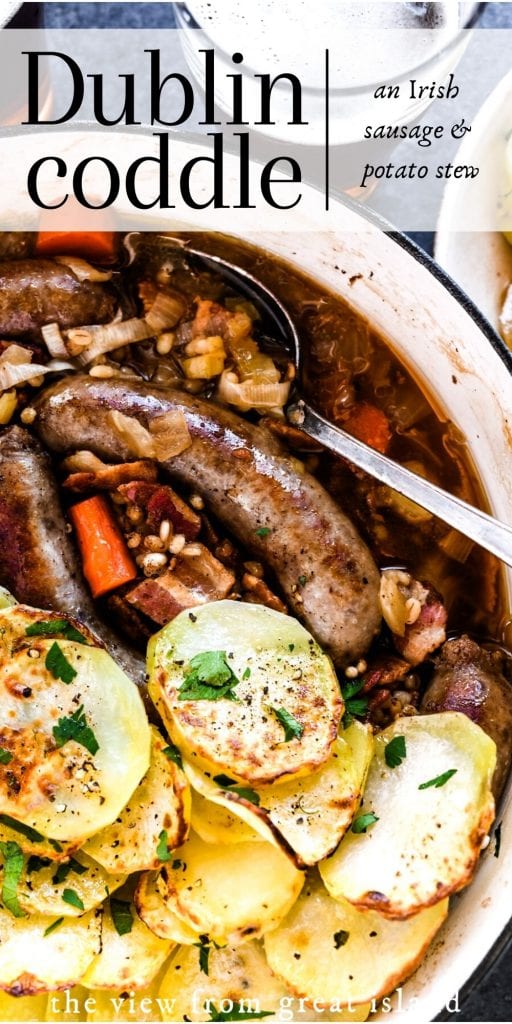 Dublin Coddle is a classic pub meal you won’t want to miss, this Irish stew is made in one pot with bacon, sausage, onions, carrots, and a golden potato crust. A dash of Guinness makes the broth sooooo good! 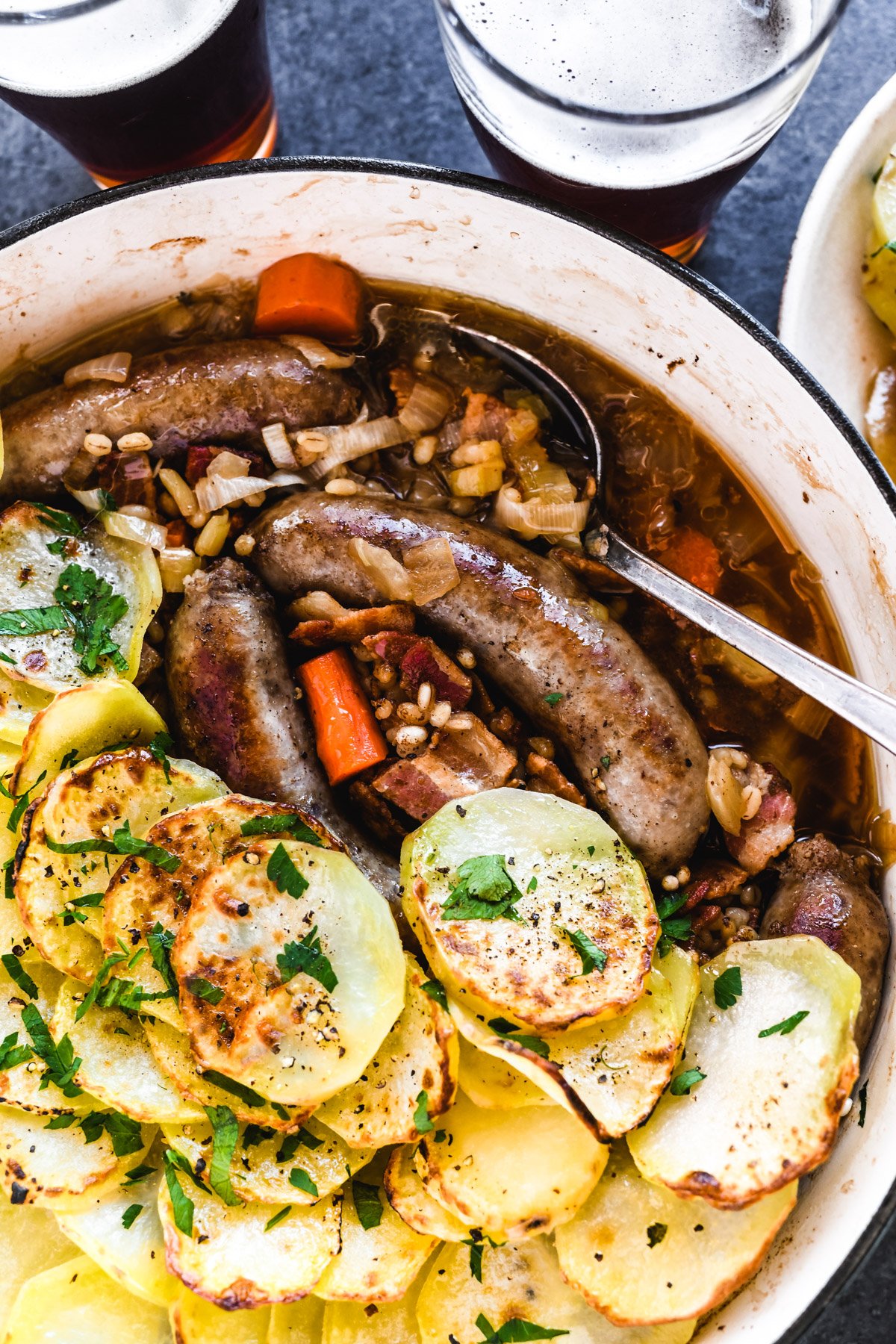 It’s nourished families during the long winter months for generations. It’s more user friendly than lamb stew or corned beef, and just as delicious, if not more so! Make it for St Patrick’s Day, or any day you just want a comforting meal on the table in about an hour. Once you try this classic sausage and potato casserole you might want to do as the Irish do and vary it up with whatever leftovers you’ve got. Brussels sprouts, cabbage, celery, turnips, or rutabaga would all be good choices.

It means to simmer gently, referring to the way the stew is braised on a low heat until everything is tender. Traditionally it might cook away on a low fire all day long, but we don’t have time for that! Besides, I like my veggies to have a little bite left in them 😉 so this one hour version is a win win.

According to Wiki: “Coddle is particularly associated with the capital of Ireland, Dublin. It was reputedly a favorite dish of the writers Seán O’Casey and Jonathan Swift, and it appears in several references to Dublin, including the works of James Joyce.” 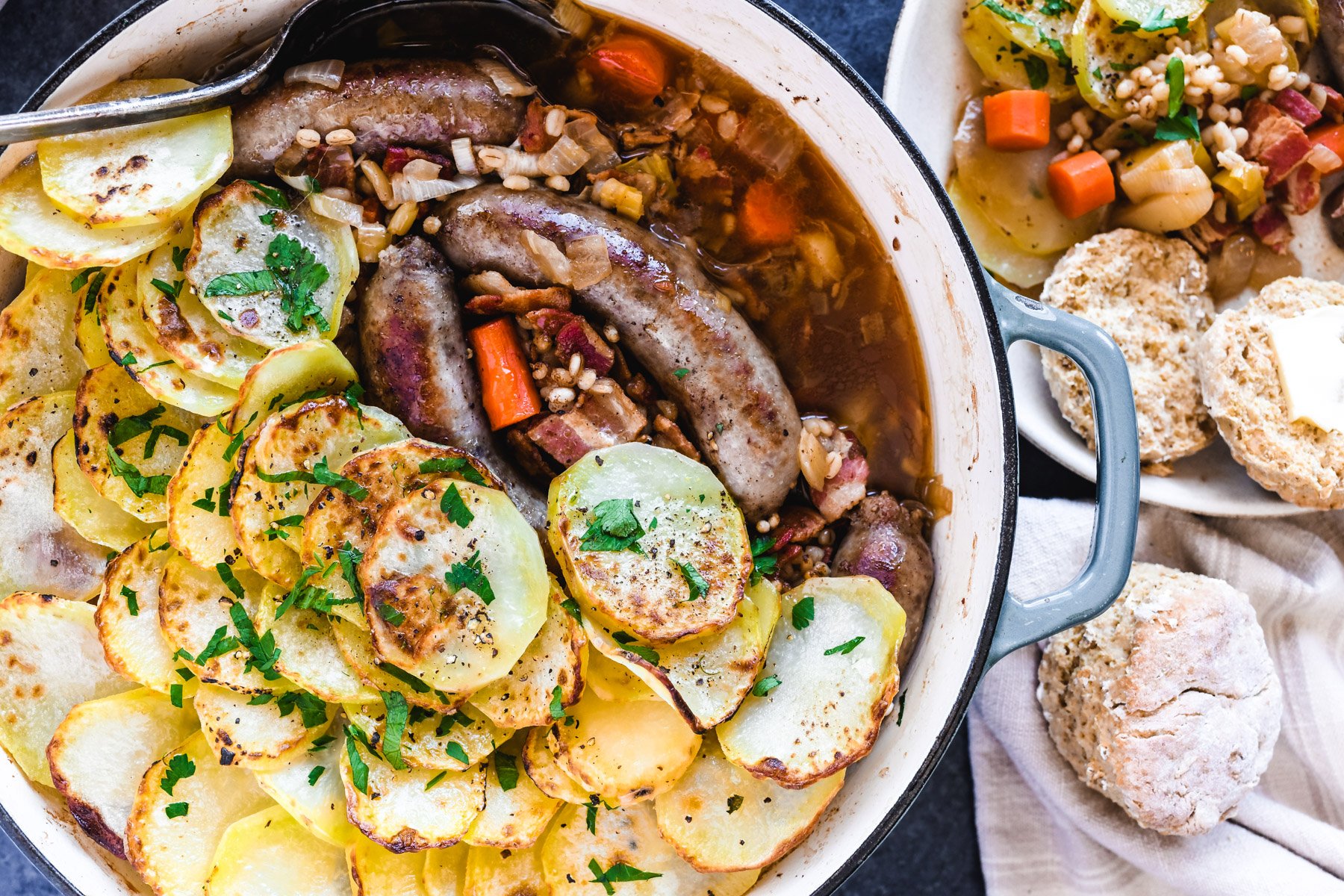 what you’ll need for this quick cooking Irish coddle

Like many Irish stews, this one has a simple list of ingredients and a rich, earthy flavor without lots of herbs and spices.

You’ll also need a heavy oven proof braising pan, or Dutch oven (with a lid) for this stew that cooks first on the stove top, and finishes in the oven. 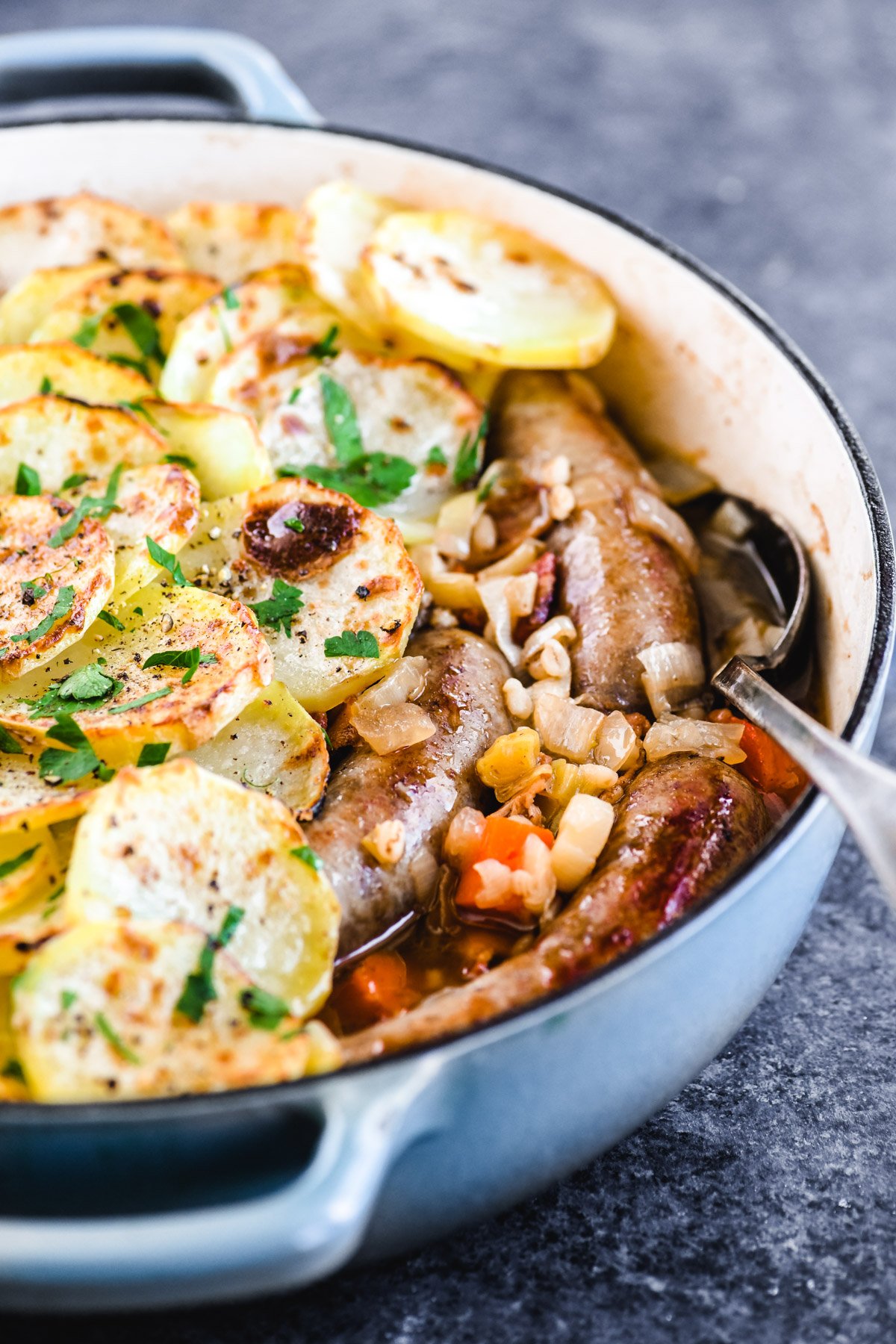 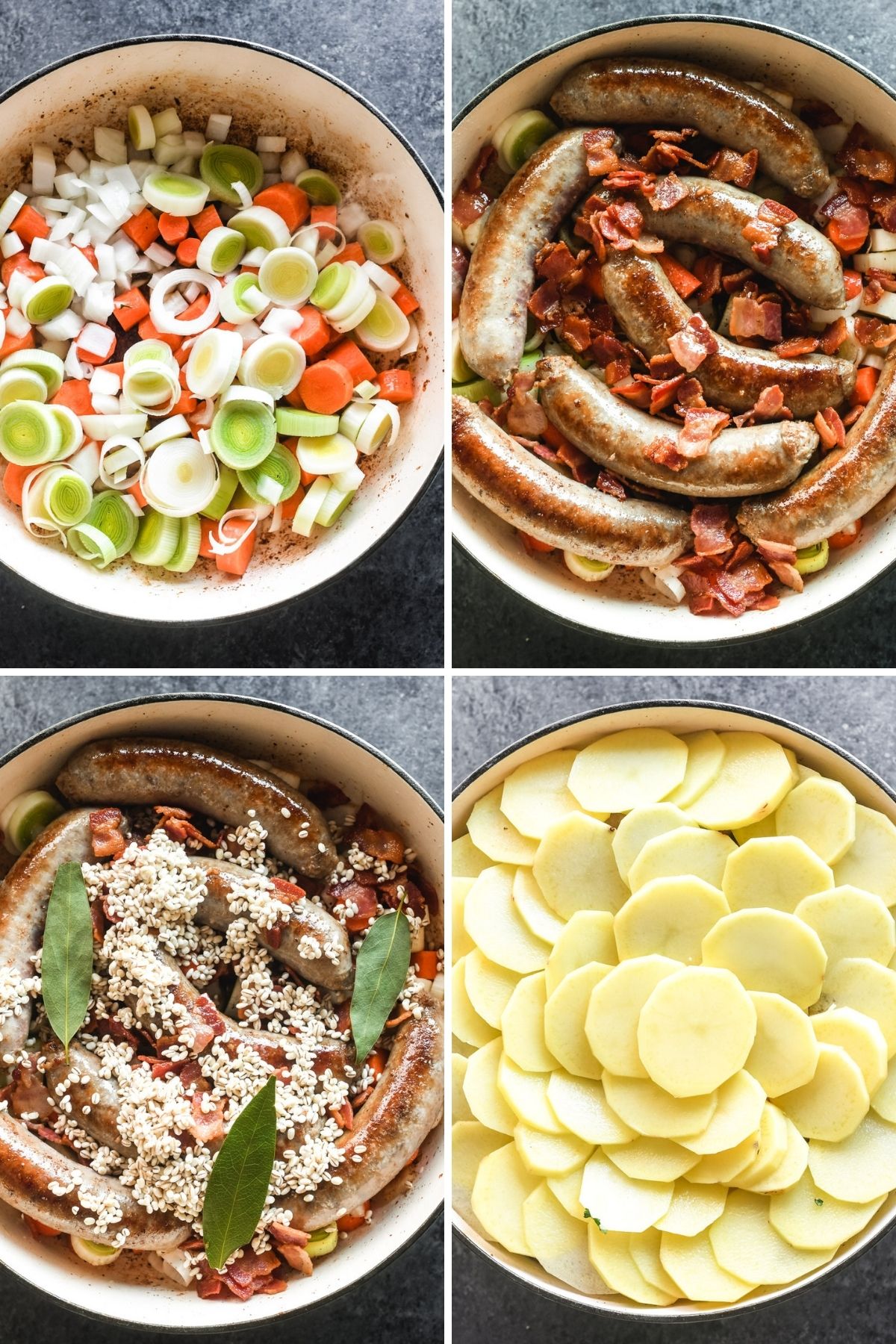 cook time for this coddle is a quick 45 minutes

We’re all familiar with stews that need very long slow cooking to become tender and flavorful, but this one can be ‘coddled’ in 45 minutes.

Our aim is to get the sausage cooked through, the broth concentrated and thickened, and the veggies to become tender.

how to make Dublin Coddle ahead of time

You can layer up the casserole in the morning, without the sliced potato topping. Cover and refrigerate.

When ready to cook, slice and arrange the potatoes.

I don’t like to add the potato crust early because it can turn brown due to oxidation. Waxy potatoes like we’ve used here don’t brown as readily as russets because they have less starch, but I don’t take any chances.

can you make this in a slow cooker?

You can ~ just layer it up through step #7 (you’ll have to brown your meats on the stove first.)

Cook on low for 6 hours.

Be aware you won’t get the golden crust on your potatoes when you cook it this way. 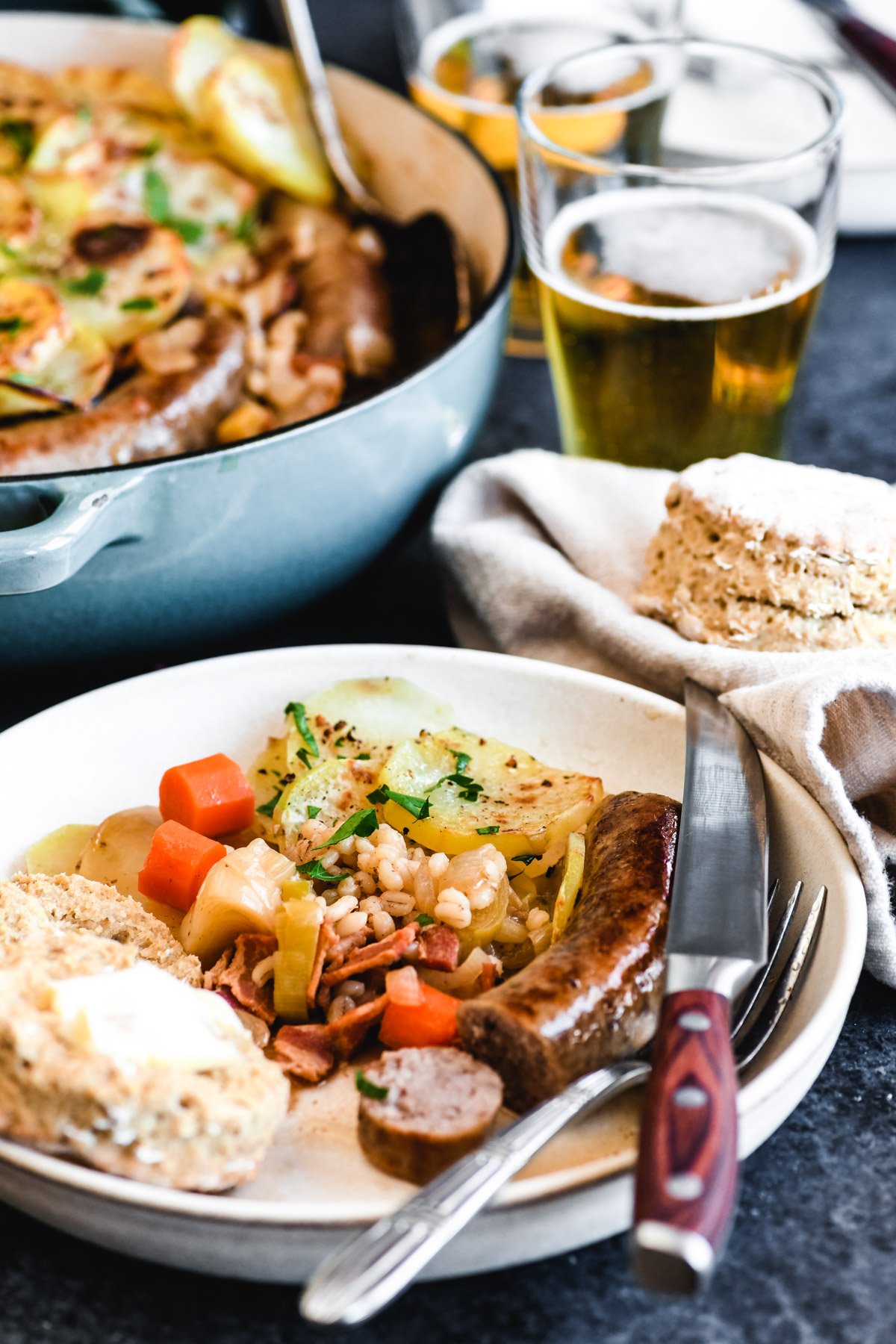 what to serve with Dublin Coddle

Dublin coddle is a complete meal, combining vegetables, meats, and starch. A good ale, of course, and some sort of bread is ideal to serve alongside because there will be lots of delicious juices to sop up. Here are some suggestions: 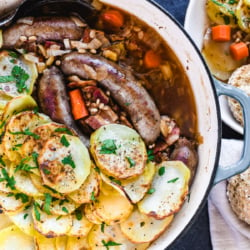 Calories: 724 kcal · Carbohydrates: 45 g · Protein: 29 g · Fat: 46 g · Saturated Fat: 16 g · Trans Fat: 1 g · Cholesterol: 121 mg · Sodium: 1098 mg · Potassium: 1198 mg · Fiber: 7 g · Sugar: 6 g · Vitamin A: 7775 IU · Vitamin C: 32 mg · Calcium: 78 mg · Iron: 4 mg
Nutritional information is provided as a courtesy and is an estimate only. This information comes from online calculators.  Although The View from Great Island attempts to provide accurate nutritional information, these figures are only estimates.
Did You Make This?We love seeing what you've made! Tag us on social media at @theviewfromgreatisland for a chance to be featured. 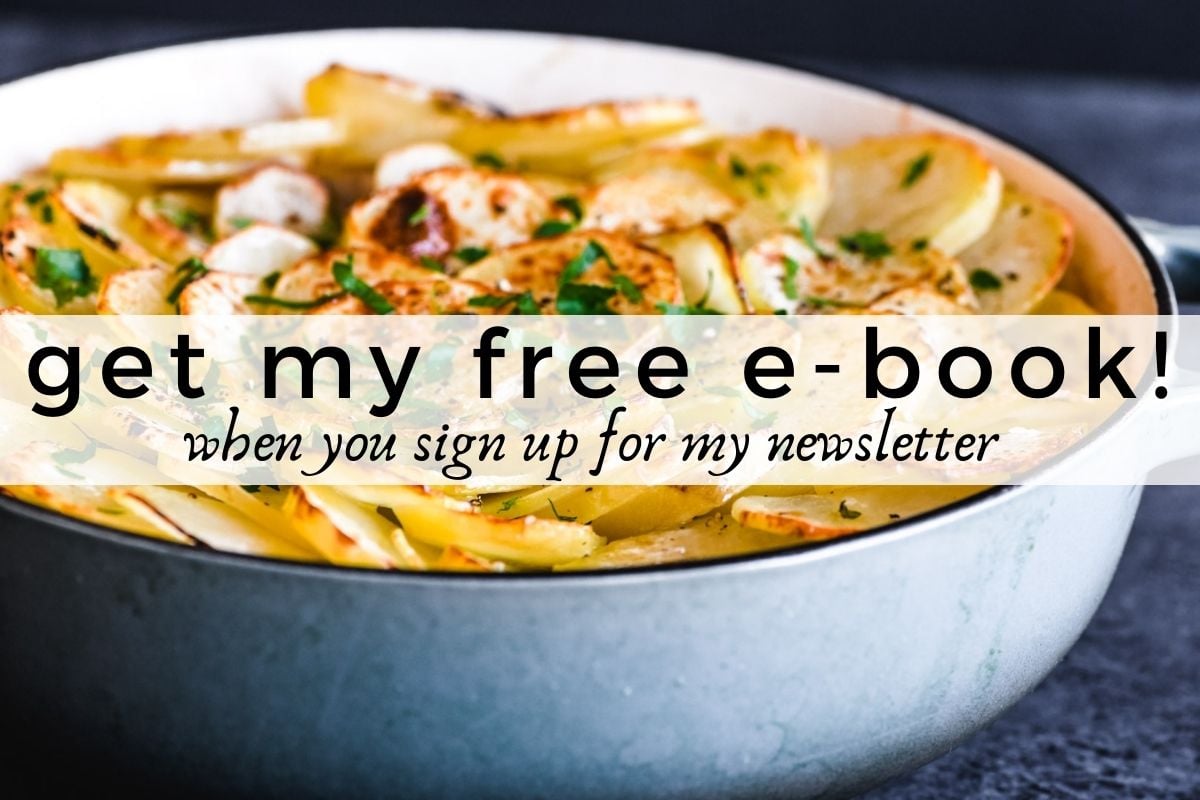 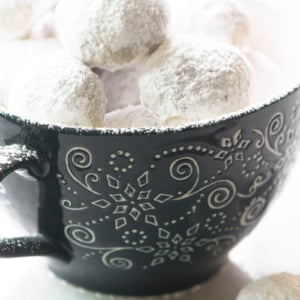 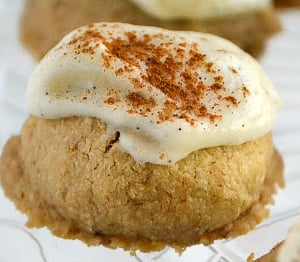 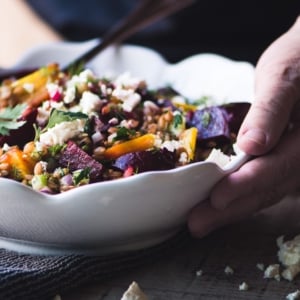 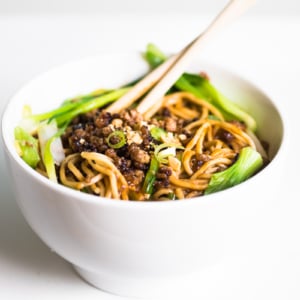