My Classic New England Fish Pie Recipe starts with flaky white fish, leeks, parsnips and peas in a creamy white sauce, topped with a cheddar-y horseradish and buttermilk mash ~  it’s hands down the most comforting meal I’ve had all year.

If you haven’t had a classic potato topped New England fish pie you’ve really been missing out. We first fell in love with them when we lived in London decades ago, they were on the menus of all the cozy pubs, and we’d buy frozen pies at our local market to make back at home in our little flat. We kept on loving them after we moved to coastal Maine and then New Hampshire where every mom and pop fish market had their own special recipe. Some were elegant with salmon and shrimp in a rich creamy white sauce, others were humble fishmongers’ trimmings from the day’s catch, made with mayo and Ritz cracker crumbs.

But here in Los Angles homey fish pies aren’t common, and I’d almost forgotten the joys of this ultimate comfort food food. A great fish pie is everything!

What kind of fish for fish pie?

One of the givens of most fish pies is the mashed potato crust, making it the fishy equivalent of a cottage pie, or shepherd’s pie. It can be thick, thin, swirled, piped, or flattened, but it’s always lightly crisped in the hot oven, and utterly delicious.

How to pipe mashed potatoes

If you’re making fish pie for Sunday dinner, or for company, this extra step is very pretty, and worth the little extra effort.

I like to brush the potatoes with melted butter once before they go in the oven, and then once more during cooking, it just helps them get nice and golden brown. It gives them a slightly crisp crust, too. Note: purists will call me out on using horseradish in the mashed potatoes, but please try it, it’s soooo good!

Make this dreamy fish pie for the people you love…then sit back, enjoy, and let them do the clean up, you deserve it!

More comforting casseroles from the archives… 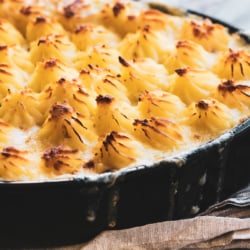 4.63 from 24 votes
My Classic New England Fish Pie Recipe has a base of fish, leeks, parsnips and peas in a creamy white sauce, topped with a cheddar-y horseradish and buttermilk mash ~  it's hands down the most comforting meal I've had all year.
Print Recipe Pin Recipe Rate Recipe
Prep Time:20 minutes
Cook Time:35 minutes
Total Time:55 minutes
Servings: 8 servings

What to serve with fish pie ~

Fish pie can absolutely be a meal in itself, but if you want to add something to it, here are a few suggestions: steamed Brussels sprouts, green beans, asparagus, broccoli, or a crisp salad.
Course: Main Course
Cuisine: American
Author: Sue Moran
Keyword: casserole, comfort food, dinner, fish, recipe

Fish pie is such a classic that all the famous chef’s, especially from Britain, have weighed in with their special versions: 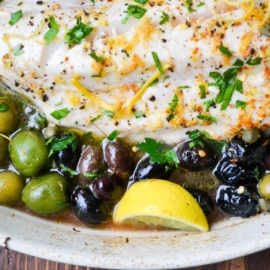 Cod with Lemon and Olives 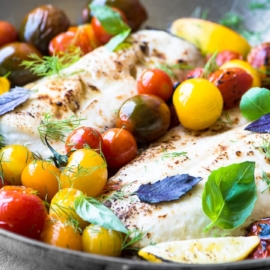 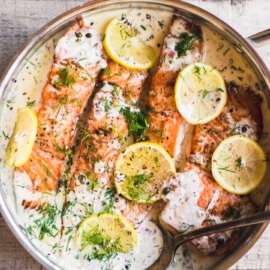 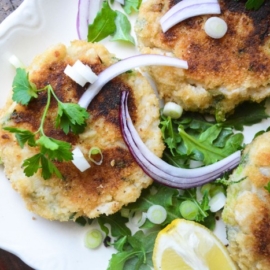