The Best Cottage Pie Recipe ~ ground meat with veggies and gravy under a crust of golden potatoes ~ Cottage Pie and its cousin Shepherd’s Pie are the crown jewels of Irish and British country cooking and everyone should know how to make one. 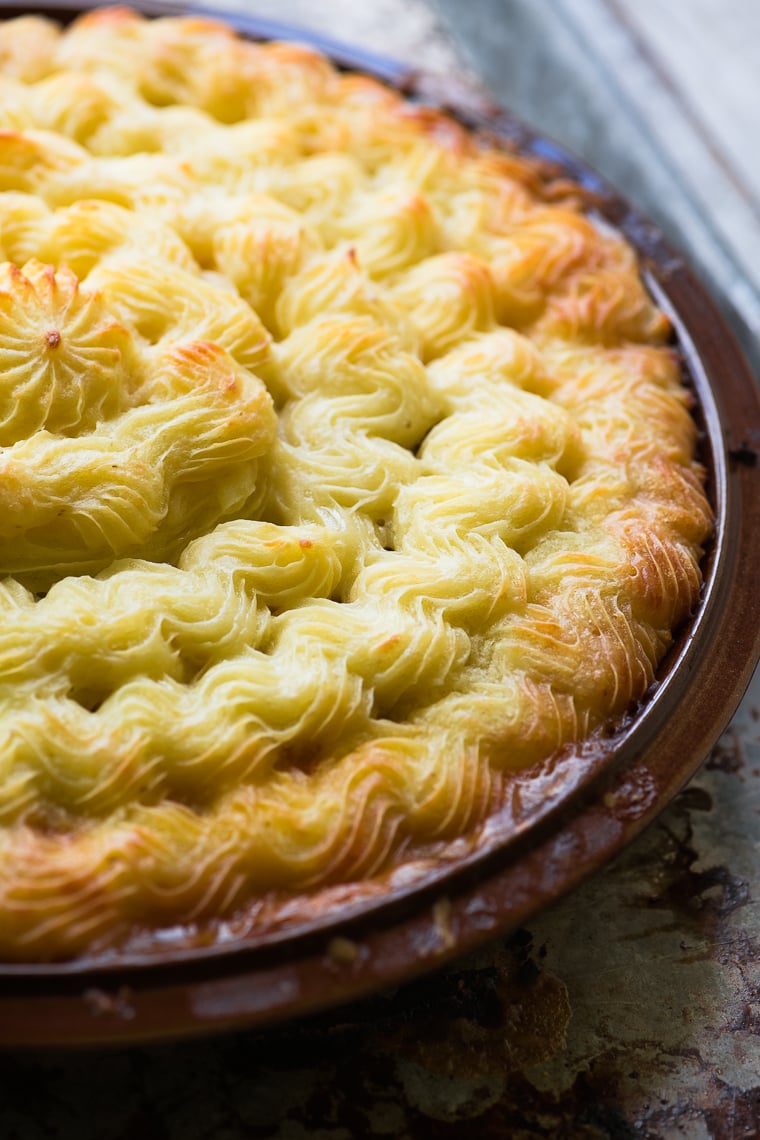 If you’re a lover of casseroles and comfort food you’ve probably come across a proper cottage pie before, maybe in a restaurant or pub, or maybe you’ve made one yourself. The cottage pie has been a beloved comfort food for centuries, and I think my version is the best I’ve ever had, I hope you try it!

There’s nothing fussy or difficult about this recipe (unless you decide to pipe your mashed potatoes on top which, admittedly, is a little fussy.)  The ingredients are dead simple, but combined in such a way that makes this one of the coziest meals ever invented. 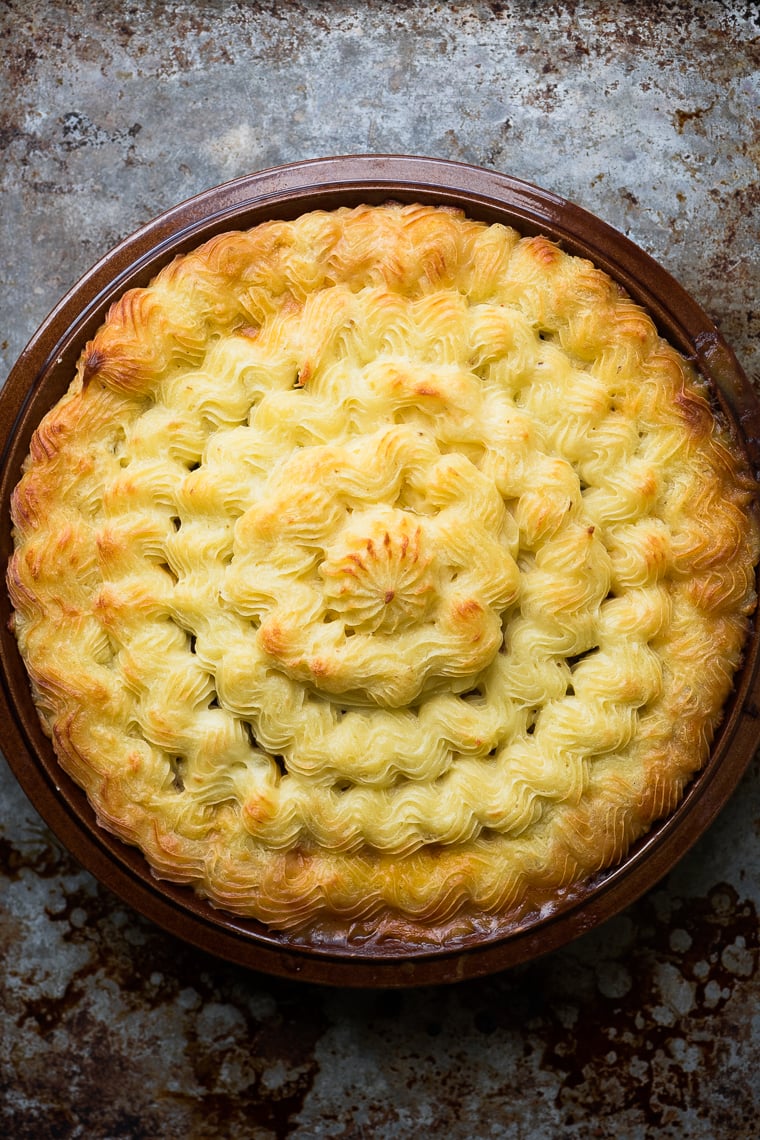 What’s the difference between cottage pie and shepherd’s pie?

I elevated my cottage pie just a little bit by asking the butcher at my supermarket to grind short ribs for me instead of picking up the usual ground chuck or sirloin. That little luxury that paid off big time in flavor. In fact I’m now officially obsessed with ground short ribs, and I’m already planning an epic burger post, so stay tuned. 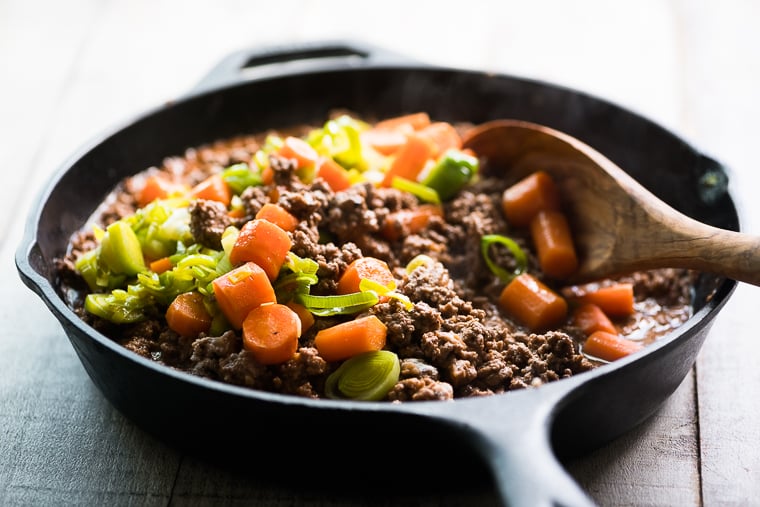 I like to make my cottage pie in a pie plate, but any type of casserole will work. I could have even baked it right in my cast iron skillet and brought that to the table. 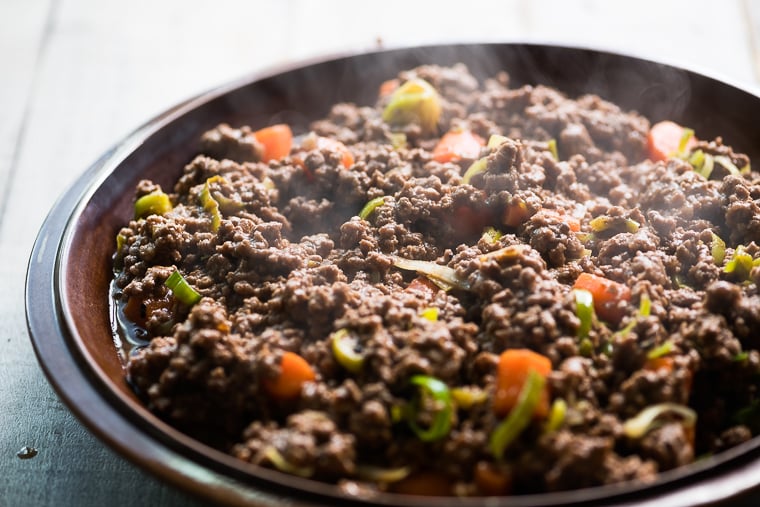 The mashed potatoes on top are made with buttermilk and good old English Cheddar (although I used good old American Tillamook).

If you’re a quick hand with a piping bag you might want to pipe your potatoes this way for company, but otherwise I’d suggest just spooning the mash onto the pie. Use the back of a large spoon to make pretty swoops if you like. The traditional way is to use the back of a fork to create a crosshatch pattern. 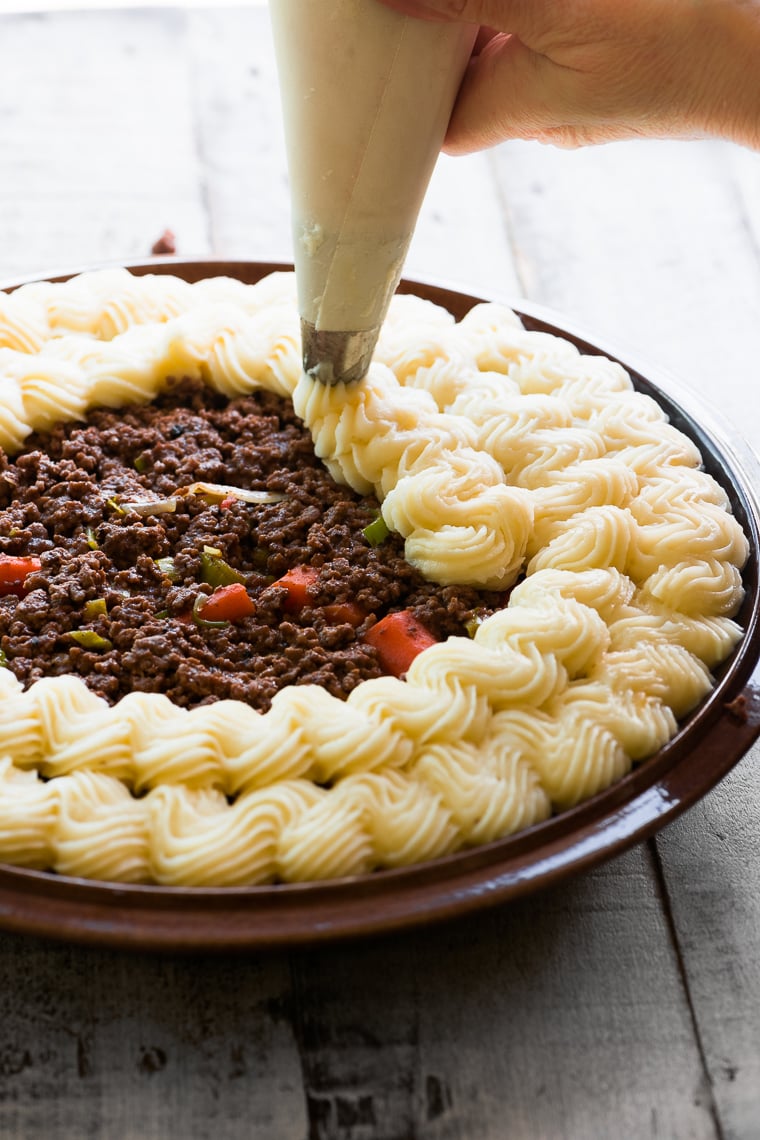 No matter which method you choose, be sure to give the topping a little texture, and brush it lightly with melted butter before popping it in the oven, that way it will brown nicely. 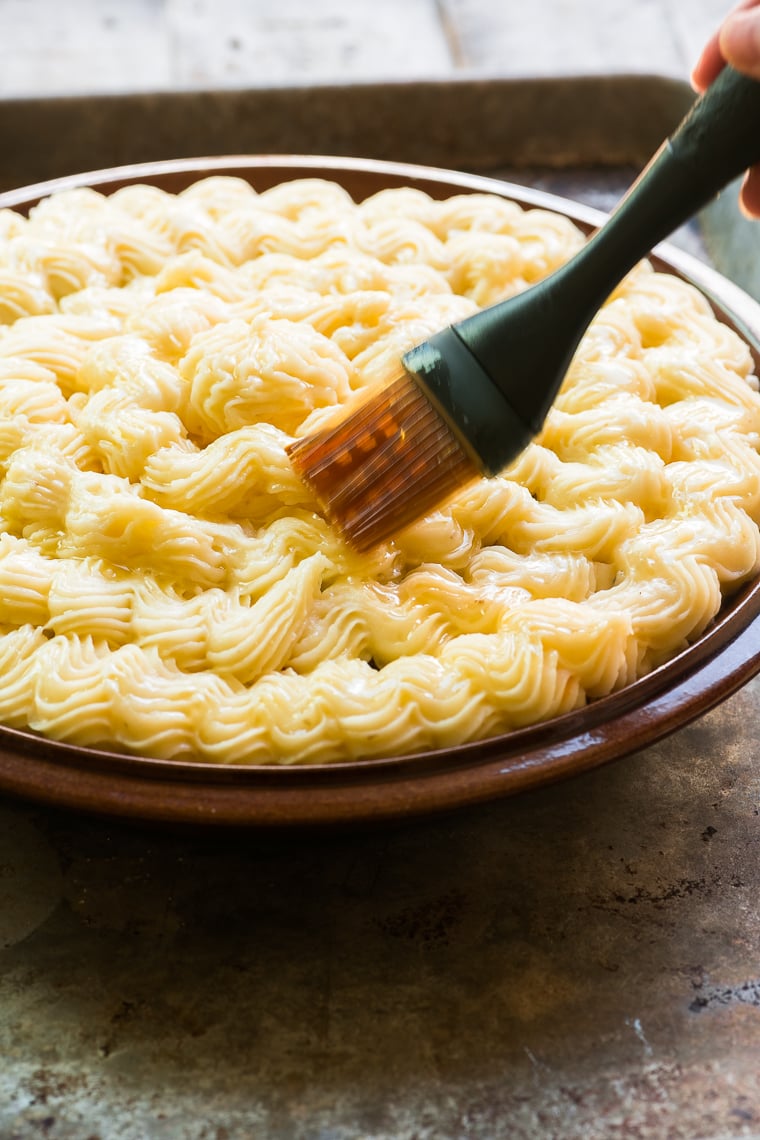 Why is it called cottage pie? 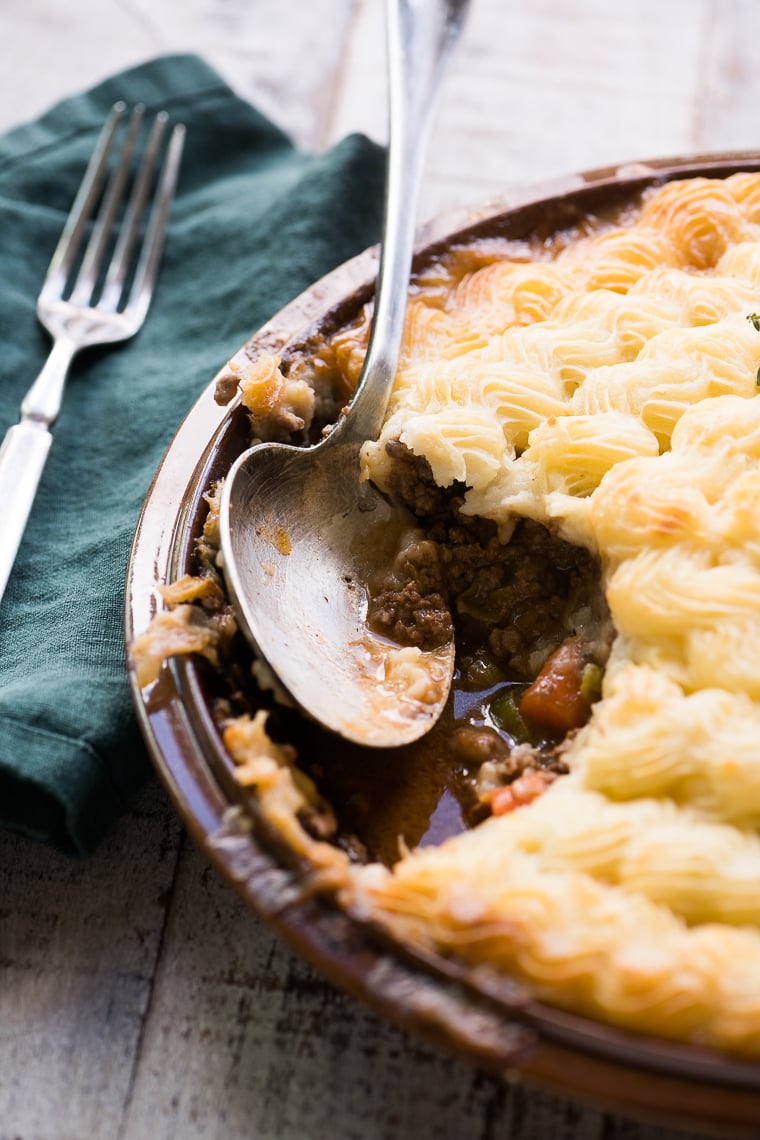 Make this with ground beef for the family, and maybe splurge on the ground short ribs for company. Put it in the oven when friends arrive, and it will be bubbling and delicious when you’re ready to sit down to dinner. There’s nothing better than bringing a fresh-out-of-the-oven and still bubbling cottage pie to the table.

What to serve with cottage pie ~

And by the way, when it comes to serving cottage pie, Britain’s The Guardian has advice for shepherd’s pie that applies equally well here ~

“Of course, only a fool would serve shepherd’s pie mash-side down. And do not be too prim with it. Occasionally, you see rectilinear slices of shepherd’s pie that look like an exercise in geometric precision. That is in no way aesthetically enticing. This should be a fat, casual splat of food in your bowl. One that clearly says: “Relax. You’re home. Roll your sleeves up. Dig in.” 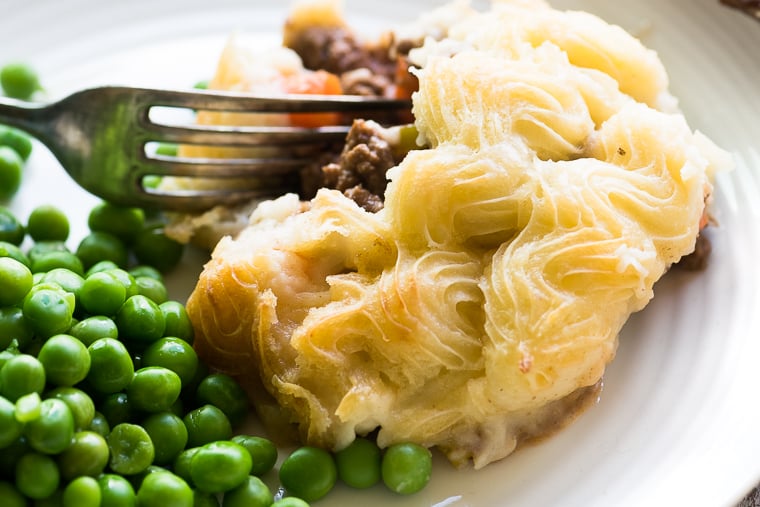 Can I make cottage pie ahead?

Can I reheat cottage pie?

Can I freeze my cottage pie? 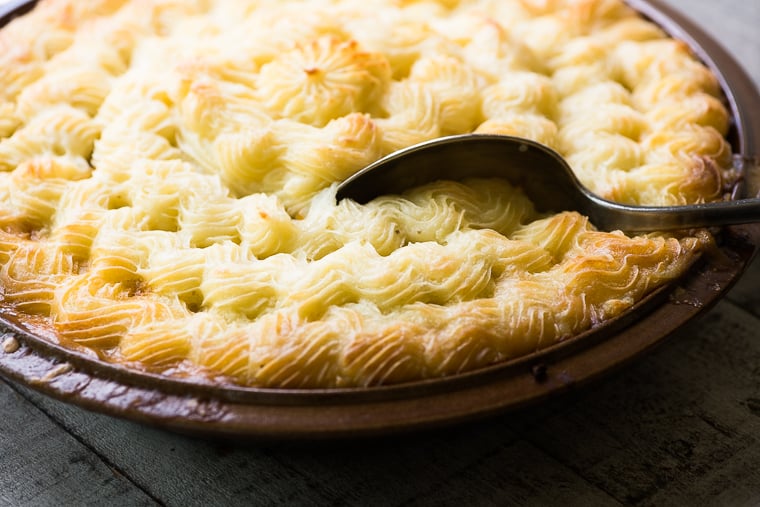 TIP: if you plan to try to pipe your mashed potato topping, use the largest tip you can find, and make double sure that your potatoes are lump free. Any errant lumps can clog your tip and give you a headache (been there, done that.) 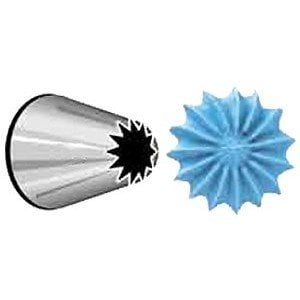 I used the Wilton open star piping tip for my mashed potato topping, it’s named 6B. Even if you’re not much of a baker I think it’s helpful to have a few piping tips in your arsenal for the odd occasion when you feel the urge to get fancy. I think the large tips are the most useful for frosting cupcakes, piping meringues, and toppings like this one.

Note: I used the 6B, above, but I’m also ordering the Wilton 8B open star tip, which is even larger and better for things like mashed potatoes. 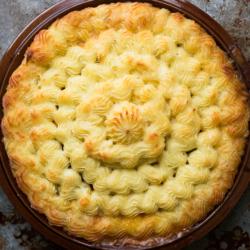 3.55 from 114 votes
The Best Cottage Pie Recipe ~ ground meat with veggies and gravy under a glorious crown of golden potatoes ~ Cottage Pie and its cousin Shepherd's Pie are the crown jewels of Irish and British country cooking and everyone should know how to make one.
Print Recipe Pin Recipe Rate Recipe
Prep Time:25 minutes
Cook Time:50 minutes
Servings: 6 servings

Make this cottage pie your own ~ 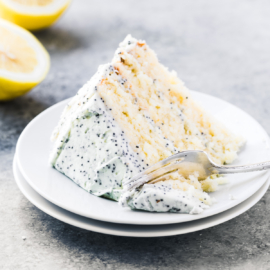 Why we love lemon poppy seed everything! 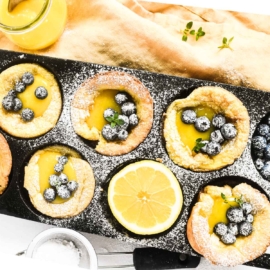 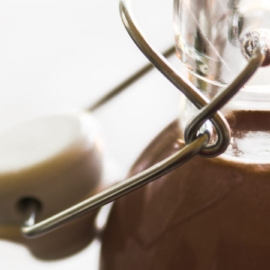 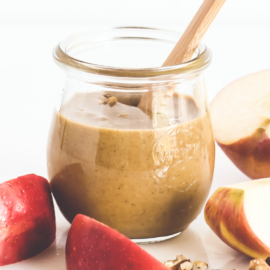