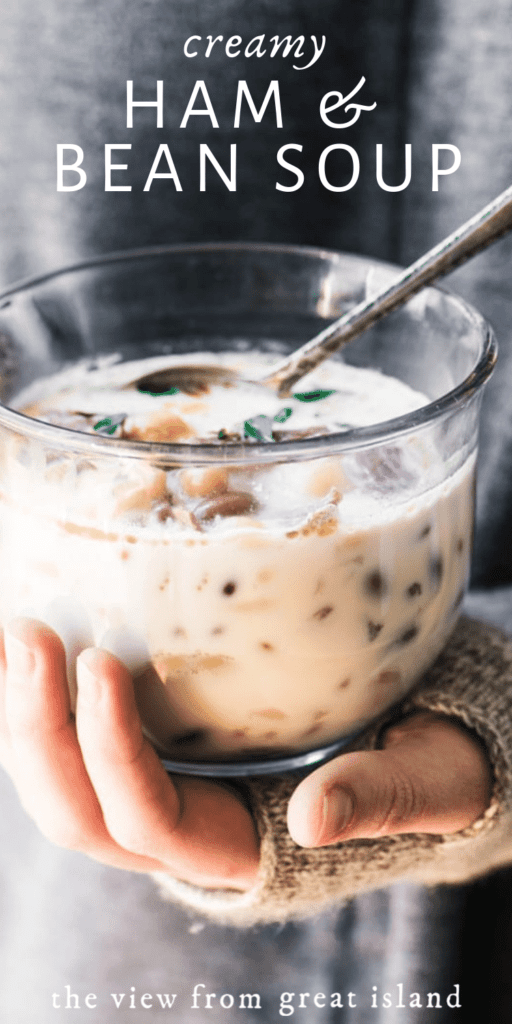 Creamy Ham and Bean Soup is a luxe way to use up a leftover ham ~ I make a big pot of this wonderful chowder, it only gets more wonderful as it sits.

I sometimes look forward to the leftovers even more than the original dish during the holidays. I mean, what could be better than having a hunk of ham, with the flavorful bone attached, sitting in the fridge just waiting to be turned into something warm and comforting like this creamy ham soup?

Ham soup is usually a once a year treat for me. I make it right after Christmas with the remains of our holiday ham. Truth be told I stash away some of the meat before the bone gets picked clean just for this type of soup. But it’s way too good to only enjoy once a year!

Don’t have a leftover ham? No problem, use a ham shank or a ham hock from the butcher. If you use a hock, which doesn’t have much meat attached, you’ll need some extra ham for this soup. You can even use a thick slice from the deli counter.

the soup base is a delicate ham broth

This soup is based on a delicate ham broth that isn’t too strong or overpowering. I make it a little differently than usual ~ I cook the ham broth in one pot, and the dried beans in another. I’ll strain the ham broth after it’s simmered for about an hour and a half, and then add the cooked and drained beans. A little bit of heavy cream, some seasonings, and a nice shower of fresh thyme completes it.

did you know dried beans are a super food?

They’re a great meat substitute and we should all be eating more of them.

I love beans, and there are always a ton of different varieties in my cupboard. I like to make this soup with lots of different shapes and colors, which makes it taste great, and look pretty, too. I’m comfortable cooking them together, even though some will become tender before others ~ that just gives a little variety of texture ~ some will be firm, and others will be completely soft. I salt the water (it’s a myth that it makes the beans tough) and I always use bay leaves, I love the flavor they impart to the beans.

There are several ways to cook dried beans ~ you can dump them in the slow cooker, cover with cold water, and let them simmer away for several hours. You can soak them overnight, then cook them on the stove the next day. Or, like I do, you can cover them with water, bring to a boil, and set them aside for an hour. Then drain, cover with fresh water, and cook until tender. Any way you do it, dried beans take a bit of time, but they’re so worth it!

I cook black beans separately because they tend to color the other beans an unappetizing grey. And if you want to use lentils, add them later in the process because they cook much quicker than other beans.

This is a very simple soup, with a clean and light taste. In fact I debated whether to include the world ‘creamy’ in the title at all because it’s not heavy or thick like traditional cream or bean soups, it has more of a brothy texture. The ham gives it a unique flavor, and the whole thing is just lovely. 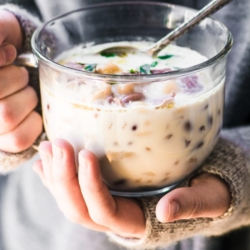 3.86 from 21 votes
The flavor of this soup improves over time, so feel free to make it ahead.You could, if absolutely necessary, use canned beans for this soup, but you would lose some great flavor and texture.You could add some grated Parmesan cheese to the soup as you serve it, if you like.
Print Recipe Pin Recipe Rate Recipe
Cook Time:3 hours
Total Time:3 hours
Servings: 8 servings

Course: Soup
Cuisine: American
Author: Sue Moran
Keyword: beans, creamy, ham, legumes, soup
Did You Make This?We love seeing what you’ve made! Tag us on social media at @theviewfromgreatisland for a chance to be featured. 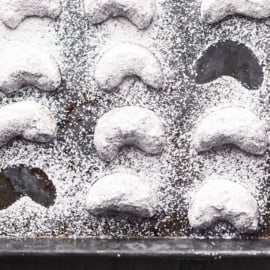 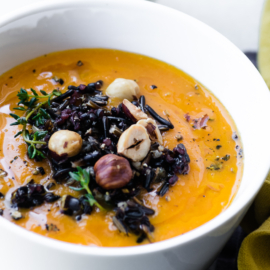 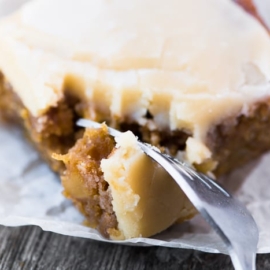 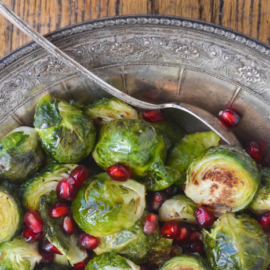