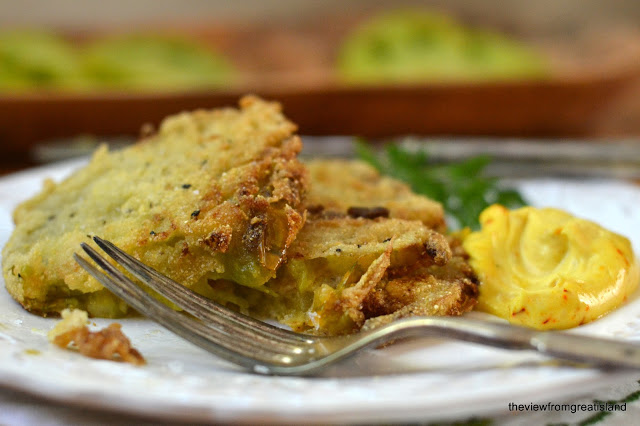 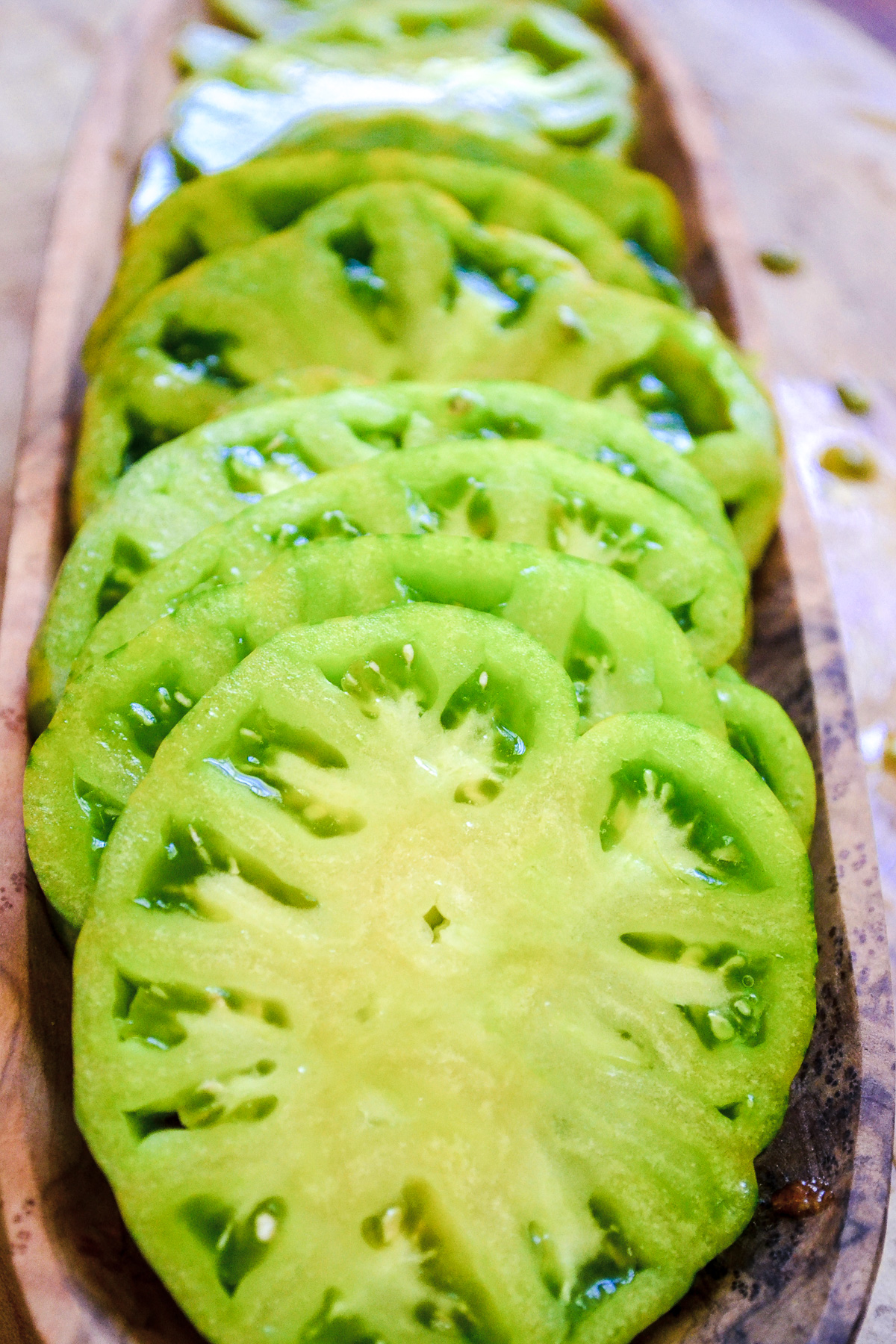 Fried tomatoes aren’t the most photogenic food in the world, I admit, but boy are they tasty.  And it’s good to know how to fix them for yourself, because you sure won’t find them on many menus outside of the true South.

Normally you’d use unripe green tomatoes for this dish, but I’ve changed it up just a bit to use naturally green (and ripe) heirloom tomatoes.  It makes the dish a little sweeter and a little juicer.  Not a bad thing in my book. 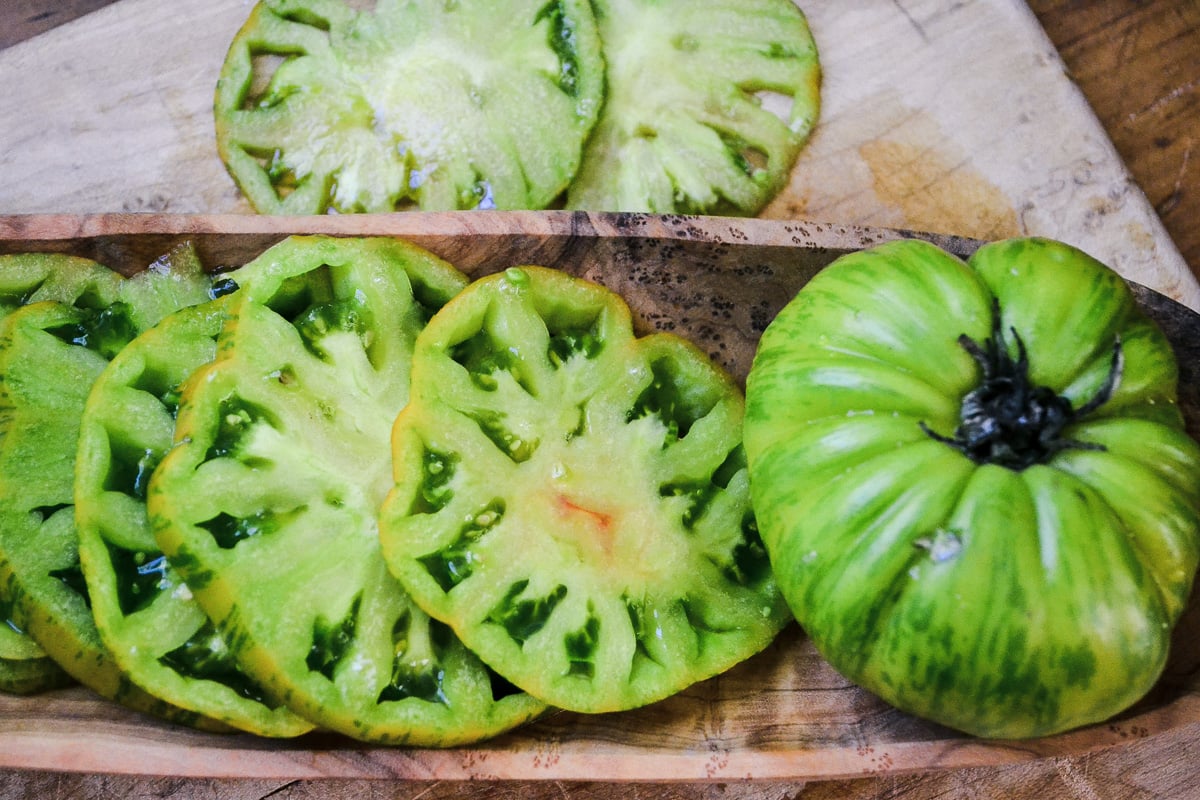 You’ll need a nice sharp knife to slice your tomatoes evenly.  I like to start with large, round tomatoes for the best slices.  The variety I’m using is Green Zebra.  As heirloom tomatoes go, it’s on the firmer side, with a zesty flavor ~ perfect for this dish. 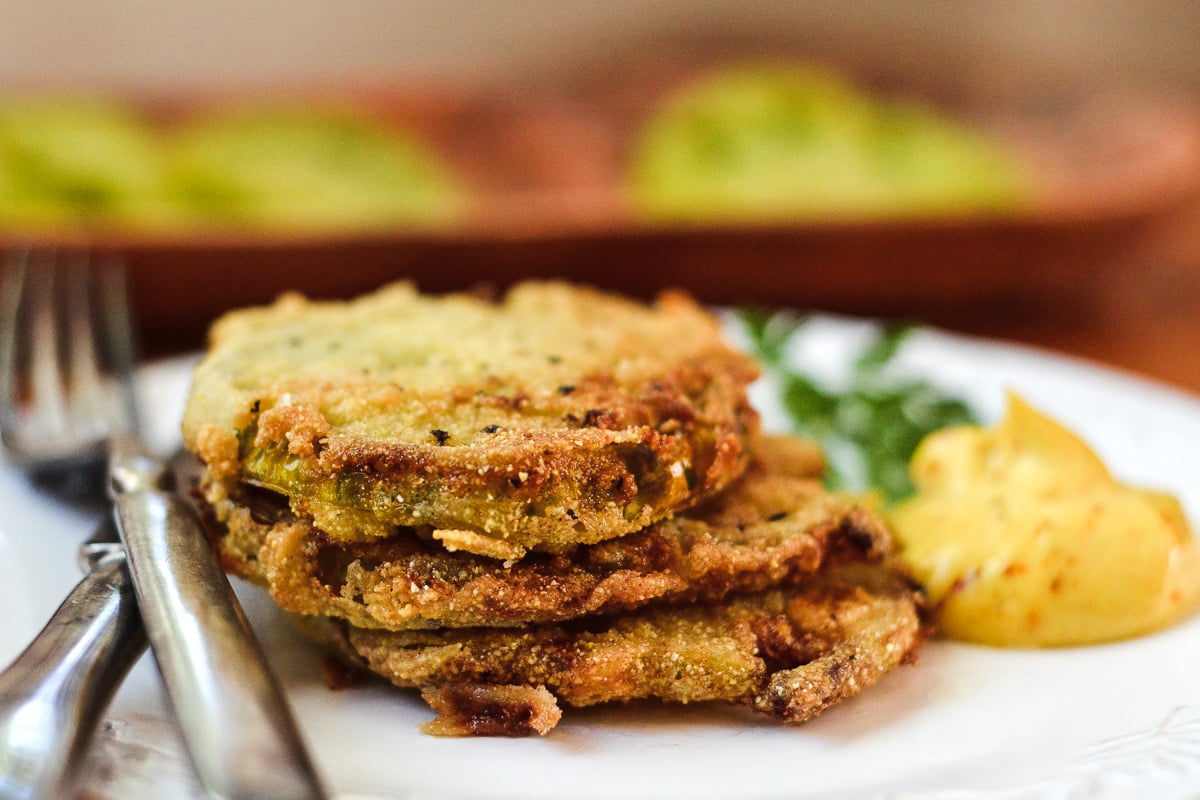 Tip: be sure to get the oil nice and hot before you put the tomatoes into the pan, that way the crust will cook up to a nice crisp golden color quickly, and the tomatoes will stay firm.  You should hear a nice strong sizzle when you drop the first one in.

Don’t crowd the pan, either, give your tomatoes enough space or they’ll stem instead of fry. 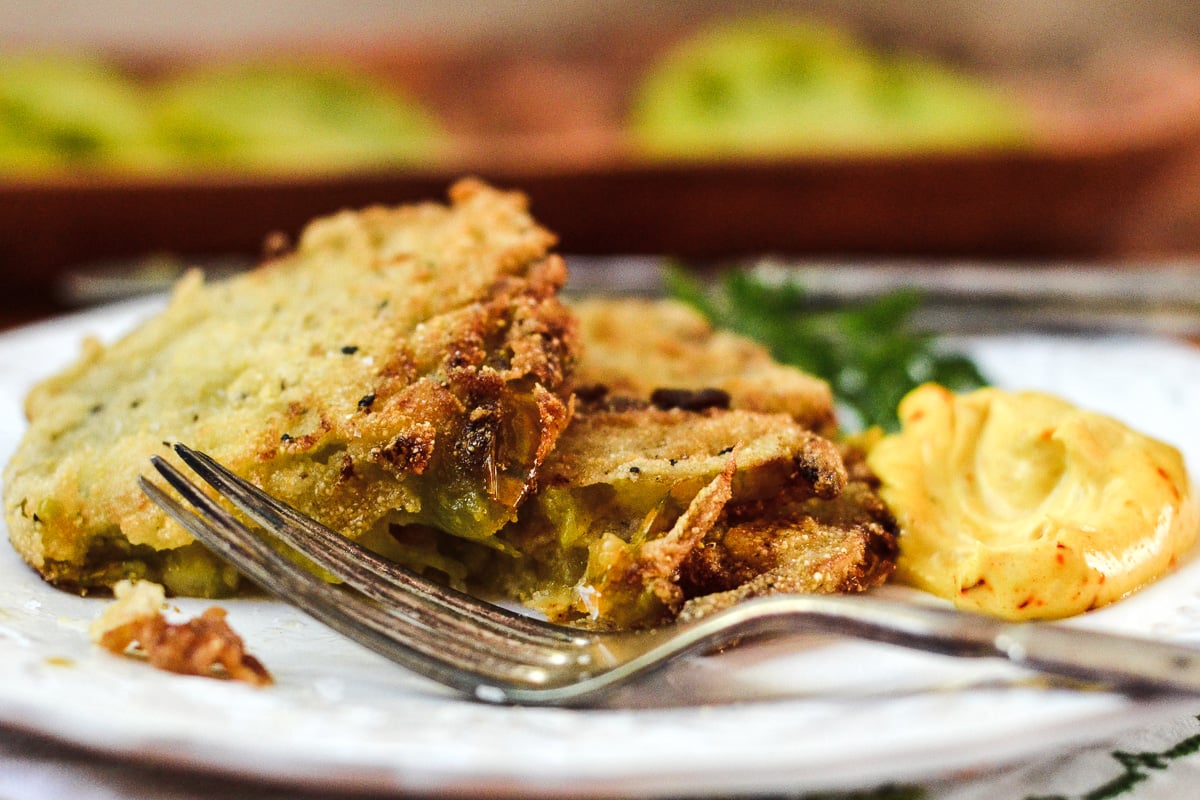 A side dipping sauce is essential to great fried green tomatoes, and my Saffron Aioli adds a colorful touch.  My Lemonnaise would be great with these, too, or even a buttermilk dressing to serve as a dipping sauce.

Eat these fried green heirloom tomatoes alongside eggs, bacon and grits for breakfast, or just on their own as an appetizer or lunch. 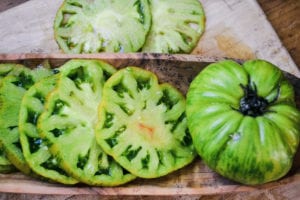 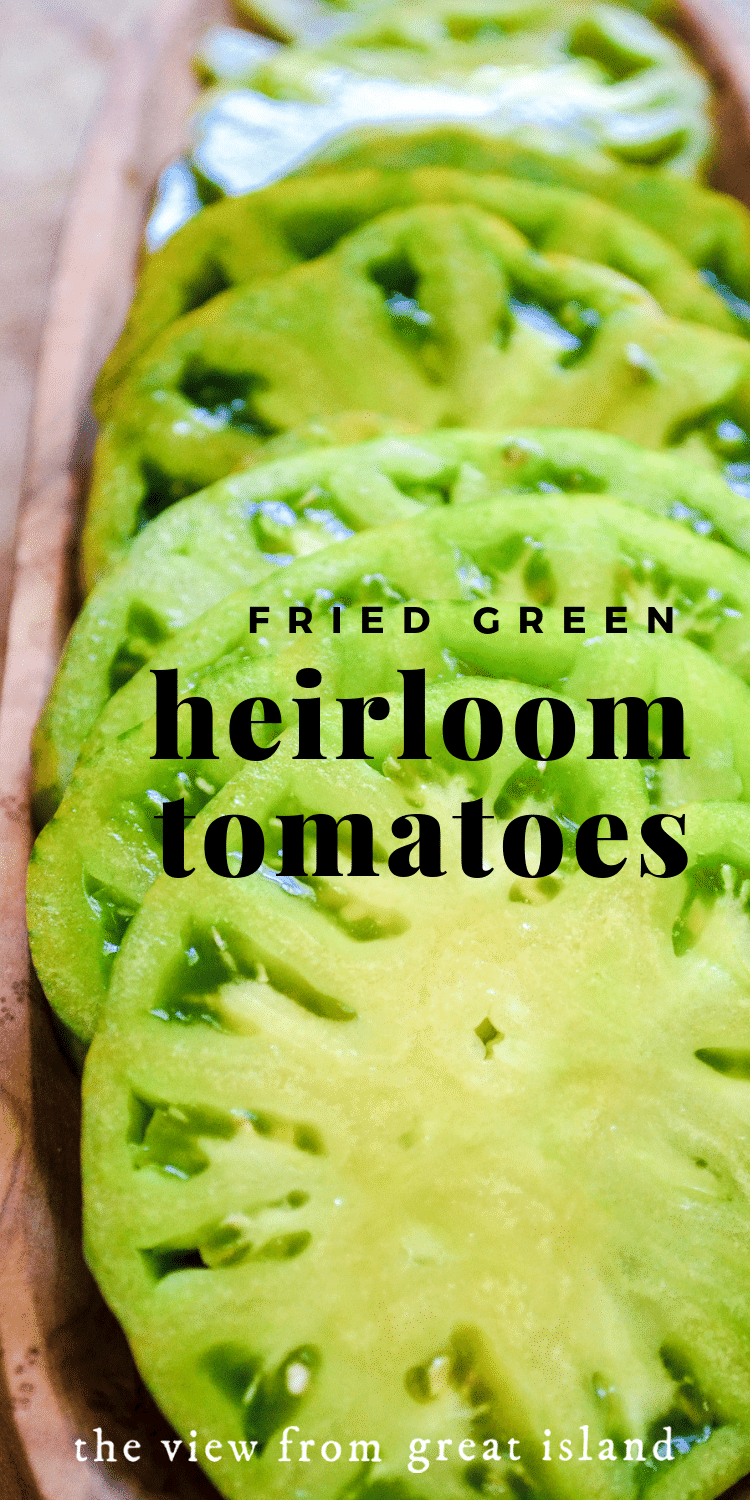 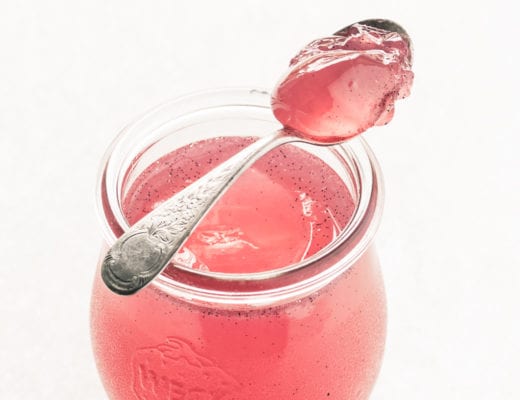 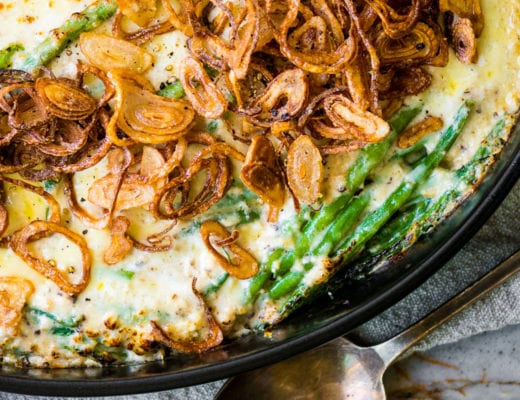 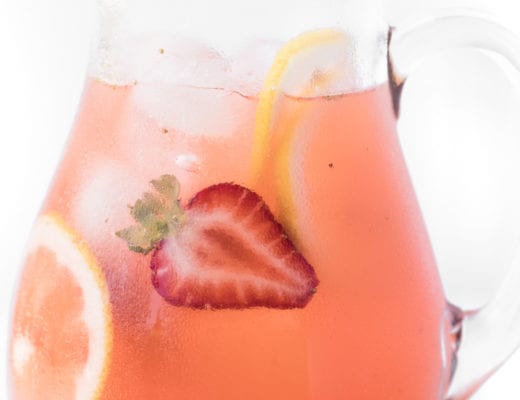