I recommend having company around to help out with the eating part (you don’t want to be left alone with a pan of these, trust me.)  I’ll be honest, these blondies are intensely sweet, sweeter than most of the desserts here at tvfgi. And there’s something about the texture of the blondie paired with the maple sugar frosting (and the bits of tart Granny Smith apple) that makes them irresistible. Don’t say I didn’t warn you.

When I have an idea for a recipe I often start by going back to something I’ve already had success with to use as a base for my experimentation. In this case I loved the texture of my Banana Blondies, and figured they’d be a good starting point for these. I guessed I could easily replace the mashed banana with apple butter, since they both have a similar consistency, and I was right. I was able to add the chopped apples without any other adjustment, so it was a pretty straightforward adaptation.

infusing maple flavor into the frosting

Maple is a fabulous flavor but it can be difficult to infuse into baked goods. I like to reduce pure maple syrup by boiling it, which concentrates the flavor. In essence I make a maple caramel base for this frosting — and the result is a fudgy maple layer that is sooooo good.

TIP: You can infuse maple into your baking in several other ways. For instance there is maple extract, (use it just like vanilla extract) maple powder, (dehydrated maple syrup) and maple sugar, (use it in a 1 to 1 ratio for regular sugar.)

The maple/caramel frosting sets up fast, so have everything ready to go and spread it immediately after pouring it onto the (mostly) cooled blondies.

TIP: Be sure to sift your powdered sugar, if you skip this step you can wind up with lumps in your glaze. 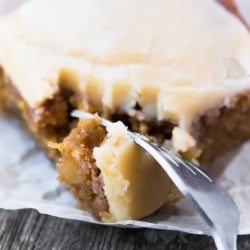 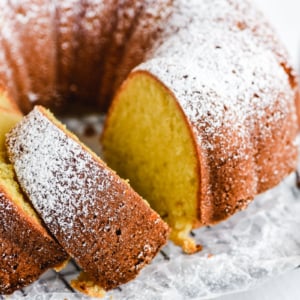 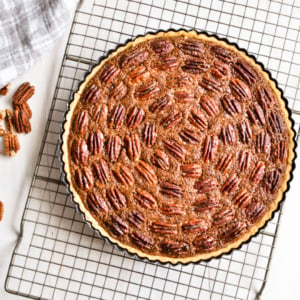 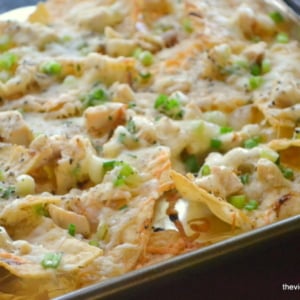 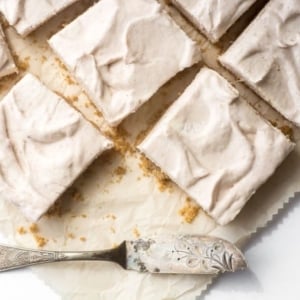