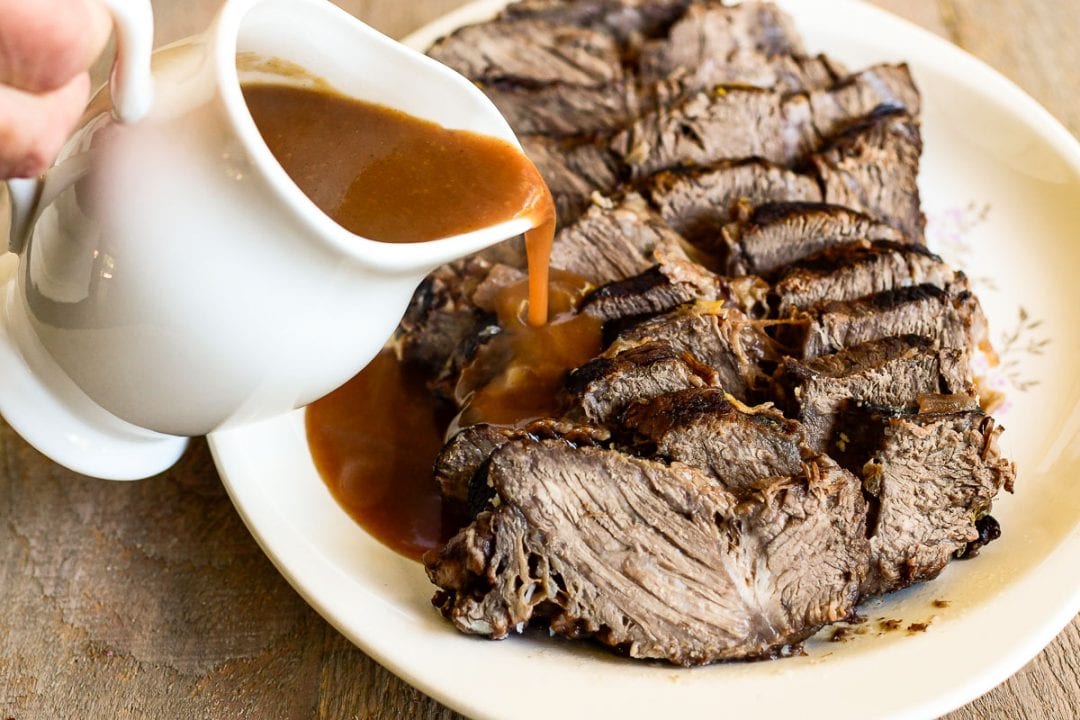 This authentic German Sauerbraten recipe comes straight from my grandfather’s kitchen ~ you can do this braised chuck roast on the stove, in the oven, in the crock pot, or the Instant Pot for the most comforting meal ever! Perfect for family dinners, Octoberfest celebrations, and holiday gatherings.

Sauerbraten is a classic German pot roast with fork tender meat in a rich sweet and sour gravy.

Once you’ve tried it I know it will become a part of your recipe repertoire forever, it’s that uniquely delicious. The smell coming out of the kitchen while this cooks is that classic rich meaty aroma we all miss from childhood, it makes you feel safe and cozy…and insanely hungry.

This is inspired by my grandfather’s sauerbraten. He got it from his mother, Alma Schultz, who immigrated from Germany to New Jersey at the end of the 19th century. She brought her treasured recipe for sauerbraten with her and my grandpa reinvented it for us. This recipe is as close to his as I can get, it’s delicious!

What makes sauerbraten so different from English pot roast?

Two things make sauerbraten so unique…for one thing the meat is traditionally marinated for up to 3 days before braising. And secondly, the flavors in that marinade, which eventually becomes the gravy, are rich and multilayered. English or American pot roast is typically flavored with onions and carrots in a fairly plain brown gravy. This sauerbraten, on the other hand, contains:

What cut of meat is best for sauerbraten?

You can make sauerbraten with some of the same types of meat you use for American pot roast, look for a piece about 3-4 pounds:

What are gingersnaps doing in pot roast??

Crushed gingersnap cookies are traditionally used to thicken the sauerbraten gravy. I was skeptical at first, but it works beautifully! It basically acts like a spiced flour to thicken the gravy. The spices work well with the flavors in the sauerbraten, and the little extra sweetness helps to balance the sour element. Lovely!

Tip: there are many kinds of gingersnaps and while all will work, I very much prefer the classics imported from Sweden: Nyackers are super thin and crisp, with an authentic spicy flavor. You can buy them online, or at stores like Cost Plus/World Market. I always stock up in fall because I use them for crumb crusts in holiday desserts like my Cranberry Gingersnap Pie.

A 2-3 day marinade is traditional for sauerbraten

The multi-day marinade is traditional for sauerbraten, and the theory is that the longer you leave the meat in the acidic marinade, the more tender it gets. This is the way it’s been done for generations in Germany. It’s not difficult at all, and once you’ve assembled your marinade you can stash it in the fridge and forget it for a few days. I like to marinate it right in my enameled cast iron pot, but you can also use a large heavy duty zip lock bag. Just be sure the meat is fully immersed in the liquid, or plan to turn the meat every day so there’s no spoilage.

Studies have indicated that marinating meat is not particularly useful at all, that the flavoring doesn’t really penetrate into the meat, even after a long period of time. And what’s more, acidic marinades can actually work to make meat a little bit…mushy. So feel free to skip the lengthy marinade if that works better for you. You can read more about this here.

Tip: Marinate meat in glass, plastic, stoneware, or enameled cast iron, but avoid a metal pan or container. Metal can react with the marinade and give the food a metallic flavor, yuck.

Feel free to experiment, all these variations are authentic!

Venison, lamb, pork, or even turkey can be used instead of beef.

Use Riesling (white) wine instead of red wine, or even a dark German beer.

Use apple cider vinegar instead of red wine vinegar.

I used wine, vinegar, and beef stock as the base for the gravy, but you can use all wine, or even all vinegar plus water.

Sometimes the gravy is thickened with sour cream, heavy cream, or even pumpernickel bread instead of the gingersnaps.

While it looks a lot like regular pot roast, I can assure you the flavor is fabulously unique and will provide a delicious and memorable experience for family and friends. Serve the sliced meat on a big platter and pour gravy over it, then serve extra gravy on the side.

What to serve with sauerbraten

You don’t have to serve specifically German sides with sauerbraten, it pairs well with all sorts of choices: 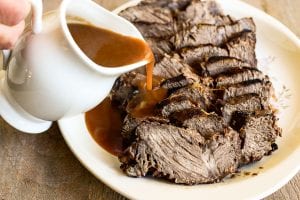 This authentic German Sauerbraten recipe comes straight from my grandfather's kitchen ~ you can do this braised chuck roast on the stove or in the oven for the most comforting meal ever!
Course Main Course
Cuisine German
Prep Time 20 minutes
Cook Time 3 hours
marinating 2 days
Total Time 2 days 3 hours 20 minutes
Yield 6 servings
Author Sue Moran
Prevent your screen from going dark

How to adjust for the slow cooker:

How to adjust for the Instant Pot

Can I leave out the wine? Yes, just use apple cider with apple cider vinegar.  You can also use more beef stock, or even water. I don’t have gingersnaps, but want that flavor, what can I add? You might thicken the gravy with a flour and water slurry and then add some dark brown sugar or a little molasses. Doesn’t the meat spoil when you leave it that long in the marinade? No, the wine and vinegar in the marinade keep the meat from spoiling. Do I have to marinate the meat that long? No, I mention in the post that there is evidence that marinating is not very useful after all, so feel free to marinate for a shorter time, or even skip that step.  I don’t have juniper berries, what can I substitute? Just leave them out, there are plenty of other flavors in this dish. The gravy is too sour for me, what can I do? The gingersnaps help to balance the sour element, so don’t leave them out, and you can add some extra sugar or brown sugar to help as well. My gravy never got really thick. Sauerbraten gravy is not meant to be very thick, it should be silky and have some body to it. My gravy isn’t dark and rich as it is in the pictures. Depending on your wine and other ingredients your gravy could be a slightly different color.  I love to use a few drops of gravy browning like Kitchen Bouquet to darken pale gravies.
The nutritional information for recipes on this site is provided as a courtesy and although theviewfromgreatisland.com tries to provide accurate nutritional information, these figures are only estimates. 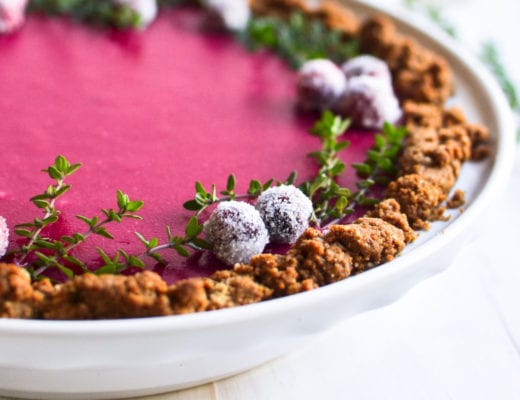 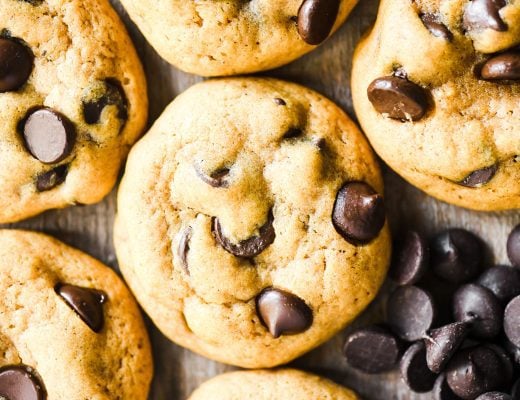 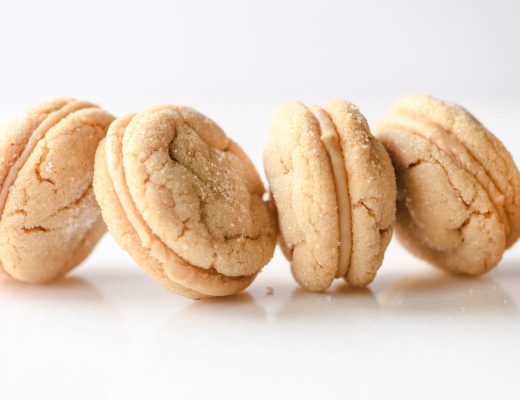